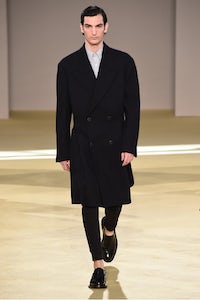 MILAN, Italy — While the Simple Minds sung “Alive and Kicking” inside the Rotonda della Besana — a deconsecrated church — Ferragamo models strode by in some striking pieces such as straight coats gathered at the hips with Velcro tabs, faultlessly tailored jackets worn with slouchy Bermudas and boots, patchworked over jackets, printed shirts matching printed work trousers and super-tempting thick knits. But this reviewer kept wondering about the overall temperature of what Paul Andrew is doing at the Florentine house. If not icy, it’s no more than lukewarm.

This is not to take away from the work. The product is excellent, and Ferragamo’s rising status among fashionistas and cognoscenti is testimony to this. Andrew and menswear design director Guillaume Meilland land a modern take on tailoring, and excel particularly with outerwear and, needless to say, accessories. It is the overall image which lacks elan.

This season, the inspiration sounded stimulating on paper: a survey of six male archetypes and their respective uniforms — sailor, soldier, surfer, race car driver, biker, businessman — reshuffled and remixed into something new. Bankers stripes, for instance, got a slouchy treatment, while sailor jumpers were mixed with biker pants. But that was it.

The sensuality — eroticism even — often associated with uniforms was absent, as was the debate between convention and rebellion. The remix and reshuffling, on the other end, could have been a little more extreme, or passionate. Andrew seems to be playing it relatively safe. A bit of risk-taking would add some healthy frisson.