At SSS World Corp, Justin O'Shea Is His Own USP

The designer describes his new, entirely self-funded line as “a better version of me.” 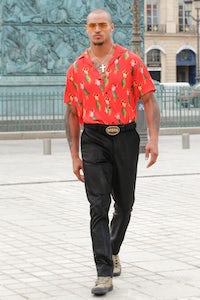 At SSS World Corp, Justin O'Shea Is His Own USP

The designer describes his new, entirely self-funded line as “a better version of me.”

PARIS, France — “The most expensive internship they ever had.” Justin O’Shea is looking back at his six controversial months as creative director of Brioni. “I had an opportunity and I fucked it up myself.” The directness, the accountability is typical O’Shea. Fuck up, move on, tomorrow is another day. O’Shea is Scarlett O’Hara with chest hair and tats. Or maybe he’s the Energizer Bunny, or a Timex watch. Takes a licking and keeps on ticking.

Ticking like the clock at 9am on a surprisingly chilly, post-heatwave Saturday morning in Paris. A handful of familiar fashion faces has been summoned to the Place Vendome for a 15-minute unveiling of O’Shea’s next act, a collection for men called SSS. The elaborately boxed invitation promised “Aloha from Hell,” along with Starbucks. No sign of coffee so far.

Among the assembled is show maestro Etienne Russo, responsible for some of the grandest productions in recent fashion memory. There are two girls holding silver reflectors, and imposing black security dudes. Does that count as production values? The easiest job he’s ever had, Russo mutters cryptically, but even he sounds a little perplexed.

A beatbox blasts something metallic and distorted. In the far corner of the square, there’s a flash of colour, then a knot of people slowly resolves itself into a column that ambles across the Place Vendome towards us. Hawaiian shirts with hula babes (skull faces), leopard jacket, tiger coat, burgundy velvet suit, collarless shirt with embroidered sharks, a coat whose jacquard combines hibiscus and weed, tailoring, the rigorous kind that O’Shea favours for himself. The models congregate, then the man himself roars up on his BMW bike, does a quick and entirely illegal circuit, and is gone.

Of course, he lopes back to talk. This particular early-morning moment is Part 1 of O’Shea’s launch. It will be followed by a lunch at fashion watering hole L’Avenue and drinks at the Ritz’s Hemingway Bar, where more looks will be previewed. The man certainly knows how to push the boat out.

Sebastian Manes, fashion director of Selfridge’s, notes that he’s his own USP. Love me, love my product. O’Shea’s no-bullshit attitude certainly writes its own stories. Where does his new line sit? “It mixes street and formal in a contemporary way,” he says. But that’s not as smart a headline as this: “It’s the third line of Tom Ford designed by Supreme.”

One thing he cherishes about his Brioni experience is that he made friends with Metallica. He says it was Snoop Dogg who told him he had to incorporate weed into his Hawaiian floral print. The name SSS is an adaptation of muscle-car logos. O'Shea himself drives a vintage Mustang made new again. You could go on and on with this stuff.

At the same time, he has a curious humility. Good lord, the guy was a coal miner back in Australia. He calls his entirely self-funded line “a better version of me.” SSS is based in Berlin (so let’s call it Triple S, to be on the safe side), but O’Shea is moving to London in a few weeks. He’s covering his bases by launching a premium gin, to be called Goldy. There just aren’t enough hours in the day.