If the collection was ridiculously pretty, it was also pretty ridiculous. 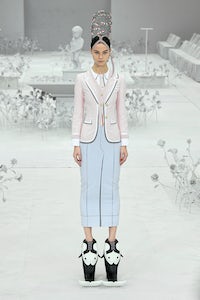 If the collection was ridiculously pretty, it was also pretty ridiculous.

PARIS, France — As talk of a cold civil war in the world’s leading democracies grips global media, can revolution be far behind? Taking the temperature of the times has never been Thom Browne’s thing — his world is strictly sui generis — but timely was exactly how his new Marie Antoinette scenario felt. A bewigged, panniered Anna Cleveland tottered around Browne’s surreal garden scenario like poor, pre-guillotine Marie herself enjoying the bosky charms of Le Hameau, the retreat she commissioned in the grounds of Versailles.

But Browne wove his pre-Revolutionary thread into the fabric of patrician Americana that has always been his inspiration. The centrepiece of his latest version of WASPWorld was a seersucker replica of Manneken Pis, the famous Brussels fountain of the little peeing boy. (He was even pissing seersucker.) Seersucker flowers sprouted from Browne’s catwalk. Seersucker birds flew overhead. The clothes were a symphony in seersucker: blazers, playsuits, collar-and-tie smartness in summertime pastels and stripes and preppy madras, with spectator shoes to match, and dolphins, ship’s wheels and schooners as Browne’s latest nu-preppy logos. Pre-Revolutionary France supplied the silhouettes: corsets, panniers, ornate swags of fabric, towering wigs, and the huge meringue of a wedding dress for by Alek Wek. This season has featured something of a dialogue between pure artifice and plain purity. Pre-revolutionary? Post-revolutionary? Browne’s collection was obviously the ne plus ultra of the former.

Or was it? The models were as exquisitely maquillaged as Marisa Berenson in Stanley Kubrick’s Barry Lyndon, a picaresque set in the 18th century. Browne mentioned Kubrick as a presence while he was dreaming up the show. There’s no Kubrick without A Clockwork Orange. Browne’s soundtrack made a droogy jump from Leontyne Price soaring through Tosca to the Fucking Champs’ punky howl “What’s a Little Reign?” The crash of high culture. What indeed is a little reign when it ends at the guillotine?

If the collection was ridiculously pretty, it was also pretty ridiculous. You can make a similar flip of the coin for any Thom Browne show. Which made me think that the supreme, surreal degree of control he exerts in his work may actually be nourished by a wellspring of iconoclasm. The revolution starts here? Imagine that!