Ryan Lobo and Ramon Martin turned out plenty of separates and dresses that retailers will love, but the runway execution lacked their typical zest. 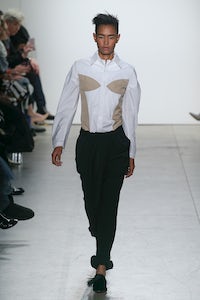 Ryan Lobo and Ramon Martin turned out plenty of separates and dresses that retailers will love, but the runway execution lacked their typical zest.

NEW YORK, United States — Tome designers Ryan Lobo and Ramon Martin love to make women look good. Really, many designers do not seem to care about flattering the body, so this is a big selling point for them. This season, the sculptures of Dorothea Tanning and Alina Szapocznikow and the work of Louise Bourgeois, all of which directly comment on the female form, helped to inform the illusion seaming and corsetry details that heavily accented the collection.

The duo also partnered with the Guerrilla Girls, a feminist-activist-artist collection, trimming jackets in fake gorilla fur and and bedazzling bananas onto certain pieces. The rally cry for inclusivity, which has been so prevalent this week, was also expressed in the casting. Once again, Lobo and Martin chose models of different ages, races and sizes. What’s nice is diversity isn’t a stunt for this duo. Next season, however, they could be more conscious about clumping groups of visually similar women together: two black girls walked down the runway, then two Asian girls, and so on. It might be an aesthetic choice, but it takes away from their mission.

All that being said, there was clearly a lot of good intention put into this runway show. What was missing, however, were enough bullseye-hitting pieces that will get those women Lobo and Martin like so much to shop. Other than a curvy black leather trench that was so shiny and chic that it begged to be yanked right off the runway, the fur looked untouchable, the proportions a bit messy and all that optical-illusion seaming overwrought. Pulled apart, Lobo and Martin turned out plenty of separates and dresses that retailers will love, but the runway execution lacked their typical zest.