At Versace, Back to the Future (Again)

For Pre-Fall, shown in New York, Donatella Versace once again took a spin through the archives. The approach is working with a new generation of consumers. 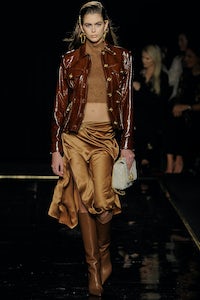 At Versace, Back to the Future (Again)

For Pre-Fall, shown in New York, Donatella Versace once again took a spin through the archives. The approach is working with a new generation of consumers.

John Idol, chief executive of Capri and head of Michael Kors, the first brand in the growing portfolio, had a little bit to do with Versace’s decision to show her first-ever Pre-Fall runway show in New York. (The deal is officially set to close next spring at the end of Capri’s fiscal year.) But Versace said she’d been eager to land in Manhattan for some time, spinning a collection out of memories of the time she spent here with her late brother, the brand’s founder and namesake, in his Upper East Side townhouse.

It just so happens that New York is also a crucial market for the brand, which grew sales in the US by 30 percent this year. “Brand awareness has always been good here,” chief executive Jonathan Akeroyd said before the show. “We thought it was a good place to start.”

The American Stock Exchange Building at Trinity Place is an increasingly popular fashion-show venue, probably because of its high ceilings and shape-shifting qualities. Versace made it all her own by planting a giant, gold-foiled replica of Lady Liberty’s torch-holding hand in the middle of a black-lacquered floor. Male attendants in Versace T-shirts were lined up along the edges to prevent attendees from smudging the shiny veneer before the models walked down it. The crowd of attendees was impressively high-wattage, especially given that it was Sunday: Bradley Cooper showed up frightfully early, while Kimye were more-or-less on time. Could-be heir apparents Christopher Kane and Alexander Wang were there, too.

Every model feels “super” when she walks in a Versace show, including the supers themselves — in this case, Gigi Hadid and Amber Valetta — thanks to the designer’s power-packed looks. This season, she once again mined the archives, cutting that iconic black-and-yellow scarf print into head-to-toe ensembles for both men and women, and whipping out a new rendition of “that” dress. The curving safety-pinned number, infamously worn by actress Elizabeth Hurley in 1994, was updated with shirring and a bit more coverage. “Sexiness [today] is not about revealing,” said Donatella Versace.

Akeroyd described the collection as having a more contemporary vibe: Now that little sister Versus brand has been absorbed into Versace Jeans, the designer’s vision is more streamlined. But no matter the label, Versace has a youthful customer in mind. After all, 50 percent of its business comes from Asia, where upwardly mobile millennials rule luxury spend. (The average age of the Chinese luxury consumer is 28, according to an October 2018 by the Boston Consulting Group and Chinese internet giant Tencent.)

Tonight’s double-breasted blazer dresses, jangly gold chains, pins and other tchotchkes — attached to everything from mini purses to miniskirts — and swirling brocades might have felt overly familiar to seasoned seat fillers, but they’re iconic, and Versace is successfully capitalising on that notion at a time when digital media makes the past highly present — only a swipe away for a generation of new luxury consumers who weren’t there the first time around but feel the pangs of internet-induced nostalgia.

“In the past few years, Donatella has been really smart about styling the collection in a much younger and democratic way,” Akeroyd said. “We’ve definitely seen a big lift and a new customer coming in, and we’ve adjusted the merchandise mix to cover that as well. Ten years ago, everybody saw us as a red-carpet brand, and we still do that, but now there’s a big awareness that we’re very strong on a contemporary offering.”

But things only went south when the youth card was played too literally: like with a pair of marshmallow-soled sneakers. The designer scored big, though, with a heart print from the artist Jim Dine, whose work was in her brother’s New York home. (Idol’s review of the look when he sat with reporters during a preview? “Wow.”)

In the end, those Versace T-shirt-clad attendants returned to the shiny black floor, this time carrying trays filled with champagne that matched the sheen of Lady Liberty. The models danced to Tone Loc’s “Wild Thing,” flutes in hand, like it was a real party, the kind that Versace would have thrown all those years ago. Not bad for a Sunday night, past or present.