No Compromises at Victoria Beckham

When Beckham made a big investment in crushed velvet for Spring, she knew she was taking a risk. Will it pay off? 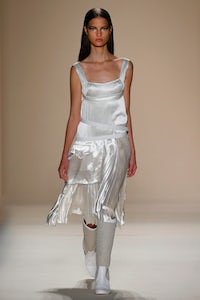 No Compromises at Victoria Beckham

When Beckham made a big investment in crushed velvet for Spring, she knew she was taking a risk. Will it pay off?

“I’ve come into my own,” Beckham said during a preview on Saturday. “I’m challenging myself.” The risk with such an honourable yet wilful endeavour is that you might also end up challenging your audience to no good end. So, when Beckham made a big investment in crushed velvet for spring, she was taking a risk.

As much as she extolled the unprecedented lightness of the velvet she was using, all you could think about was the overwhelmingly oppressive humidity in the street outside, and wonder at how such a fabric would perform in such heat. Likewise her other choices, leather and washed satin, equally unseasonal at first thought.

Mind you, Beckham did use the velvet in extraordinary colours, also radiantly odd: a deep lilac, an orange so intense it was practically hazmat, an opalescent green that looked like the dream shade of a 19th century French decadent. She even knife-pleated this last one into a skirt, to compound its extraordinariness and paired it with a kimono-sleeved top in a print of wild roses, a hardy flower, not a pretty one. It fitted with the riskiness, the sense that Beckham feels she no longer needs to compromise on any level.

The same print decorated a leather skirt, also pleated, also paired with a wide-sleeved top. The outfit had a curious folkloric quality, which carried over into the accessories: the soft shoulder bag, in fabric to match whichever outfit it accompanied, the flat canvas boots. Without being exactly military, they left an impression of strong partisan women moving through mountains.  Well, I did say idiosyncratic, and if that's how the Victoria Beckham woman fancies herself next spring, then the risk paid off.

The collection was on much more solid ground with the knitwear, Beckham’s top-selling category. The hipslung slouch of some dresses, the bias-draped, scarf-pointed languor of others, seemed much more in tune with the confident woman who took her bow at show’s end, someone who has indeed come into her own.