Andreas Kronthaler's collection was full of spiritual — even pagan — joy that was more Burning Man than punk. 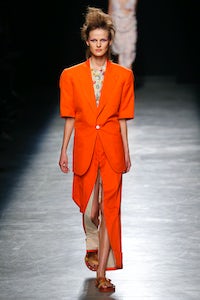 Andreas Kronthaler's collection was full of spiritual — even pagan — joy that was more Burning Man than punk.

PARIS, France — At the close of the Andreas Kronthaler for Vivienne Westwood show you felt a lot had been thrown your way: cut-off relic fingers as pendants, sexy bikinis, hay hats with petrol dunks, dresses borrowed from Scarlett O'Hara by way of Carol Burnett. To be fair, there was also an abundance of quite lovely relaxed dresses and loose trousers.

But what to make of it, beyond the tale of Kronthaler admiring women that appeared in the show notes?
In a season when punk has been on the mind of several designers, wasn't there a golden opportunity to set the record straight? But the originator of punk and her acolyte have long since moved on. Instead of nihilistic anger, there's spiritual — even pagan — joy in these clothes. Think of Burning Man and you have the connection to the present.