At Balenciaga, Dadhood by Demna

Continuing his celebration of normality with an obliquely optimistic collection, Gvasalia remodelled last season’s exec as a family man on the weekend. 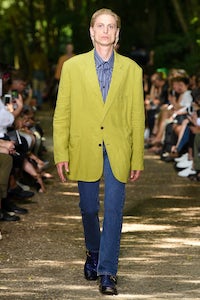 At Balenciaga, Dadhood by Demna

Continuing his celebration of normality with an obliquely optimistic collection, Gvasalia remodelled last season’s exec as a family man on the weekend.

PARIS, France — Demna Gvasalia has attached an entirely personal fantasy to his interpretation of Balenciaga’s menswear. That’s really his only option. Cristobal Balenciaga couldn’t have cared less about making clothes for men. Still, maybe even the magic Cristobal would have recognised the allure that Demna’s man holds for him, the unambiguous broad-shouldered masculinity of the thrusting young businessman, submerging his finer instincts in his race to the corporate top.

Well, tops were last season. This season, Gvasalia remodelled his exec as a family guy. “He needed to have some relaxed, comfortable, cosy moments,” said the designer. “It’s so beautiful to see a young man with a child. So hopeful, so optimistic.” So any model with kids was charged with toting them down the catwalk.

Given Gvasalia’s idiosyncratic casting, it was clear that many of these men had lived a rock’n’roll life before children arrived to anchor them to the everyday. That yielded unforgettable juxtapositions of adult faces strained by experience and bright young dials alive with possibility and the sheer joy of being out in the woods on a gorgeous Tuesday morning in Paris. “A new generation, new beginnings, the power of dreams,” Gvasalia rhapsodized. He nailed it.

The collection he showed was optimistic in that sense of opportunity. Demna used words in his typically, obliquely meaningful way. EUROPA! Despite what “populists” and “Brexiteers” might spew, we’re all in this together. THINK BIG! Kind of inspirational exec thought, but never a bad thing. THE POWER OF DREAMS. Self-explanatory.

All of them were big ideas for a scenario that was, as he said, essentially devoted to the domestic intimacy of dads with their kids on the weekend. He phrased it better: “The beauty and purity of a young man with the next generation.” So there were clichés aplenty; Hawaiian shirts, acid-washed jeans, field jackets, clear plastic rain slicks, bicycles. Then there were the jackets and coats with the exaggerated proportions that have become a Demna signature at Balenciaga.

If they didn’t quite fit with the notion of a dad kicking back with his kids after a week at the corporate coalface, the shoes were even more disconcerting. Have you ever seen one of those dads walking his kids/dog on the weekend wearing the shoes he usually wears to work? Gvasalia clearly has.

And because this was his show, there was inevitably a skewed spirit at its heart. The soundtrack (wrapped at 3am the night before by his boyfriend) had all the dystopian metal bombast of stonking German rockers Rammstein. Definitely not dad rock. The off-centre details (a woven tote in a fluoro green, a jacket with ghost pockets typical of his former employer Maison Margiela, and even the tripartite trousers, gab, denim, and leather) all nibbled at Gvasalia’s celebration of normality. I can’t imagine he’d have it any other way. As he himself said, even while acknowledging how personal the collection’s endorsement of dadhood was to him, “I’m getting out of this category soon.”