Bound for Summer at Thom Browne

Once the WTF had died down, you were left with a sense of sadness: so much exquisite work lost in what was possibly a heavily ironic takedown of the show's Hyannis Port-inflected inspiration. 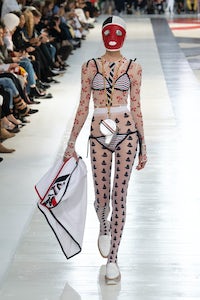 Bound for Summer at Thom Browne

Once the WTF had died down, you were left with a sense of sadness: so much exquisite work lost in what was possibly a heavily ironic takedown of the show's Hyannis Port-inflected inspiration.

PARIS, France — Thom Browne’s show on Sunday was one of the most perplexing catwalk presentations I’ve witnessed in a long, long life in fashion. Once the WTF had died down, you were left with a sense of sadness. So much exquisite work lost in a scenario that was possibly a heavily ironic takedown of its obvious inspiration – WASP-y, preppy beach culture — but who could possibly know when the designer himself is always so resolutely shtum about subtext?

In fact, during a preview in Browne’s light and airy new business premises, surrounded by the candy-coloured fabulosity of the clothing and accessories, the collection looked spectacular. He said it was Part Two of the men’s collection he showed in June, the one in the surreal garden with the gnomes, where the first half of the show was jumbo-proportioned NBA style and the second half was shrunk to normal.

It was kind of genius then, but that notion evaporated on his women’s runway, which transferred the whole kit and caboodle to the beach (I imagined something Hyannis Port Kennedy-ish?) and slowly devolved into an aimless melée of roaming gnomes, women dressed as seaside creatures, and models in the collection itself.

Aimless? It unfolded at an excruciating (lack of) speed which gave the audience ample time to reflect on the agony of the models moving round the catwalk/boardwalk with a heeled boot on one foot and a heeled shoe on the other — a curious styling flourish that simply didn’t work. Many of them wore masks, some sort of witty (a melting ice cream cone), others gruesome (a gingham Hannibal Lecter), all of them uncomfortable-looking. The models without masks were silenced by a smear of gold leaf.

If the blanking out wasn’t peculiar enough, the trussing soon took pride of place. Women bound is never a good look, and the models, arms laced to their sides, awkwardly navigating the catwalk in their tricky footwear, were a painful spectacle.

So to the obvious question. Why? Thom Browne is celebrating the recent injection of finance from Zegna, but it’s not exactly like that will unchain his thwarted creativity. Even when times were tight, he’s always been able to present conceptual fashion of such richness and idiosyncrasy that it demanded and developed its own set of responses. Not enough people appreciated the sense of humour, the drollery in what Browne did.

One illustration from the new collection: a pair of cigarette pants, trompe l’oeil ash at the hem, a filter mid-thigh. And maybe people haven’t thoroughly caught up with Browne’s often mind-boggling technical feats. Again, from the new collection: madras patchwork elevated with gingham and seersucker, iconic but prosaic, underappreciated elements.

So much thoughtfulness in the conception, and then a blind eye on the optics. One theory suggested that Browne was stitching up the traditional WASP culture of the East Coast (literally, with looks that could be taken apart and reconfigured), which consigned women to a particular role in society.

Another theory posited that Browne was dumping on the Sixties, when men, with all their toxic entitlement, used the free and easy ideology of the time to find new ways to repress women. But neither scenario played particularly well with the restrained, hobbling women inching their way round the Browne catwalk on Sunday.