Despite the downbeat inspiration, there was uplifting lightness in the tiers and ruffles, and especially in the millefeuille waves of organza that closed Erdem Moralioglu's show. 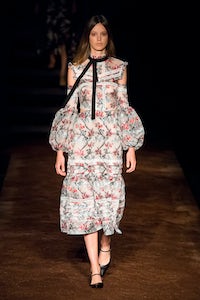 Despite the downbeat inspiration, there was uplifting lightness in the tiers and ruffles, and especially in the millefeuille waves of organza that closed Erdem Moralioglu's show.

LONDON, United Kingdom — The King’s Cross Theatre, venue for Erdem’s show on Monday morning, is bisected by train tracks, relics of a former life as part of the massive rail yards that are being so creatively repurposed in this part of London. The designer used them to full effect with an eerie prologue to his main event: a wagonload of women, still as statues, wheeled spectrally through the mist-choked darkness, with the sounds of rain and thunder amplifying the forlorn spectacle. Who? Why?

Erdem offered a history lesson as an answer: his moodsetter was inspired by the pioneers who were drawn to colonise the prairie vastnesses of America by Abraham Lincoln’s 1862 Homestead Act. European immigrants, farmers without land, and single women were given 160 acres, provided they would farm it for at least five years. It was a lonely, isolated existence, for the women at least — some unsurprisingly developed agoraphobia, otherwise known as prairie madness. By curious coincidence, The Homesman, last year’s highly praised but little seen movie with Hilary Swank and Tommy Lee Jones, was a suitably grim depiction of something similar.

It’s not the first time Erdem has touched on madness in his collections. It’s almost as if he feels like the extreme, controlled precision and detail of his clothes needs to be shaken up, loosened up, by extreme states of mind. That’s why his best work has a febrile quality — uptight but on fire — and absolutely on show for Spring 2016.

The time frame of the Homesteaders gave Erdem a chance to explore Victorian dress codes: long fitted coats and dresses, bell sleeves, tiny floral embroideries, prints that duplicated the tokens of comfort women would have brought with them, such as cameos and memento mori. And, buttons and buttons and buttons. But buttons are for undoing, and that helped the designer subtly expose midriffs, waists and shoulders. “Coming undone in a beautiful way,” Erdem called it. Like Grace Bol’s black dress with the distressed white lace yoke. The sense of passion barely contained by buttoned-up propriety was also reminiscent of Holly Hunter’s character in Jane Campion’s The Piano.

But all that period flavour didn’t deaden the sheer beauty of Erdem’s clothes. Despite the downbeat inspiration, there was uplifting lightness in the tiers and ruffles, and especially in the millefeuille waves of organza — white, black, seafoam — that closed the show. After the shadows, the thunder, the weeping strings on the soundtrack, these last dresses felt like release. A happy ending, even. 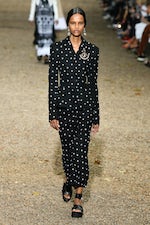 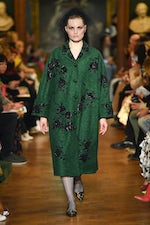 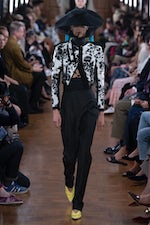 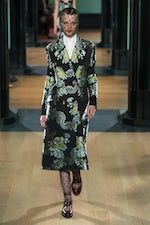