A Long Drive Through Texas 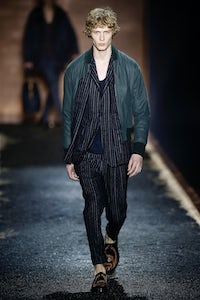 A Long Drive Through Texas

PARIS, France — The road trip has inspired artists throughout time, or at least since Homer recorded the ten-year odyssey of Ulysses. Alessandro Sartori drove round Texas for ten days last summer — not a patch on Ulysses’ peregrinations — but being alone in the car for that long did take him to new places, both in body and mind. Though he recorded the trip in the usual way — photos, sketches, little aide-memoires like dried flowers — his biggest souvenir was probably his new collection for Berluti. He showed it on a black sand catwalk.

You could sense the desert in the matte, dusty colours, hues of sunset and sand, which Sartori had given names like ‘prickly pear’, ‘cactus flower’ and ‘roadside’. Some of the footwear featured bright copper detailing (no more the brushed finish of the classic Berluti shoe), reminiscent of the work of Donald Judd, which Sartori saw at the Judd Foundation in Marfa, Texas, the ultimate destination on his road trip. Other shoes were stitched with designs by tattoo artist Scott Campbell. The same designs snaked across bomber jackets. Campbell also created Amerindian sun-circle patterns that were “tattoo-ed” on leather bombers, and also reproduced on the skin of the models themselves. On paper, it reads like the ultimate high/low quantum leap: Berluti, the height of sartorial sophistication, allying with a cult tattooist, a man whose work, he said with a laugh, is “ruining young lives and making mothers cry.” But for Sartori, the connection was simple: leather and skin, the canvas was the same.

Besides, there was plenty else in the collection that was purest Berluti — or at least, Berluti as viewed through Sartori's ever-questing lens. Like the new double construction. Jackets looked like they’d been layered one atop the other, but it was an illusion created by a double front. Sartori styled them with t-shirts whose necklines scooped low, which was typical of the collection's casual sensuality. And it wasn’t just Campbell’s graphics that added a winning raw edge. Sartori’s obsession with texture yielded mosaic jacquards of mohair, alpaca and cashmere, or needle-punched combinations of knit, cloth and leather. You recognised a kindred spirit in Bottega Veneta’s Tomas Maier, the way both men are challenging the dictates of luxury with very personal points of view. 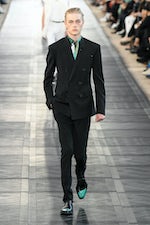 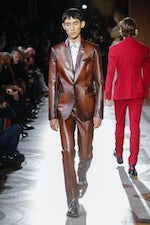 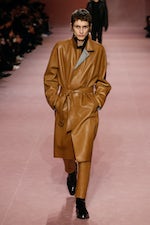 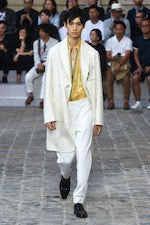 Nuance and Ambiguity at Berluti