It’s difficult to picture Abley’s work forming the foundations of anyone’s wardrobe, but his latest collection certainly captured the eye — and the heart. 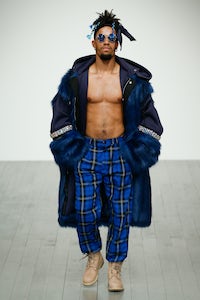 It’s difficult to picture Abley’s work forming the foundations of anyone’s wardrobe, but his latest collection certainly captured the eye — and the heart.

LONDON, United Kingdom — Bobby Abley knows how to party. His latest show elaborated on his previous collections in colourful escapist fashion, drawing on childhood cartoons and TV shows that a generation would have had on their plastic lunchboxes. For Abley, those lunchboxes have evolved into sportswear and sweatshirts that depict graphic characters like Bugs Bunny and Tweety Pie. Last season, it was the Teletubbies. Before that Power Rangers.

Considering the models were buff archetypes of machismo masculinity, it was somewhat novel to see them swaggering in glittery, rhinestone-embellished sportswear and faux fur-trimmed bucket hats. Saturated plaids on abbreviated trousers and oversized shirts added to the throwback sensibility, and some of the supersized knitwear looked like it could stand alone on a rail and entice a browsing shopper. There were some references to Brexit in the show — sweatshirts with phrases like “Legal Alien,” for example — but for the most part it was a loony, colourful display of animated clothes with plenty of colourful kitsch.

It’s difficult to picture these clothes forming the foundations of anyone’s wardrobe, largely because they are so novel and saturated, but Abley is probably aware of that when he dials it down for commercial partnerships with Urban Outfitters and Disney. If there was any doubt, a canary yellow feathery sweatshirt with Tweety’s face at the torso closed the show joyously, capturing the eye — and heart — of the child within.