Alessandro Dell'Acqua’s collection was assured and classic but appeared as if it had been designed almost on auto-pilot. 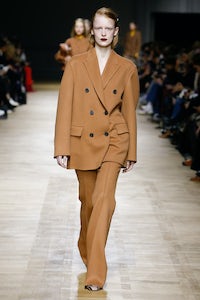 Alessandro Dell'Acqua’s collection was assured and classic but appeared as if it had been designed almost on auto-pilot.

PARIS, France — Alessandro Dell'Acqua was channeling a restrained mood at Rochas today, toning down the glitz and the grandeur of previous seasons whilst preserving the bourgeois tone that is integral to his very own take on the venerable French maison. French is the other key adjective here — at least the almost cliché idea of a French madame, as defined by countless movies, that a non-French designer might have. You know, the kind of Bunuel or Godard lady that hides a mischievous personality under a proper and elegant appearance.

Fashion-wise, it meant a focus on daywear and solid fabrics together with the brocades and fil coupé Dell'Acqua favours, worn with chunky glitter-heeled boot throughout. The mannish camel cashmere pantsuit that opened the proceedings stood out. It did not make for a groundbreaking collection, but it was assured and classic. It wasn't a mayor departure from the past, either. At this point, it looks like the collection is designed almost on auto-pilot. The label could do with a bit more of personality. After all, a French madame would never be boring.