Fading summer flowers struck the designer as the germ of a collection. How do you make such a cliché strange but still desirable? He got the emotional response he was after. 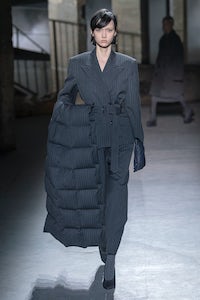 Fading summer flowers struck the designer as the germ of a collection. How do you make such a cliché strange but still desirable? He got the emotional response he was after.

PARIS, France — On a sunny Saturday last October, Dries Van Noten walked around his garden with a photographer, taking pictures of the last of the summer flowers, still beautiful but now bruised, spotted, just on the verge of rot. The contrast — beauty vs. imperfection — struck him as the germ of a collection. But one day in his backyard? Surely that was too easy. And yet sometimes the simplest ideas really are the best. Those photos provided the graphic backbone of Van Noten’s beautiful new collection, reproduced just as photographed, warts, shadows and all, on everything from a lilac chiffon turtleneck to a duchesse satin coat to a huge puffa.

The designer insisted the flowers were a challenge: how do you make such a cliché strange but still desirable? Using them every which way helped. One of the loveliest effects was the transparent rose-printed silk gauze which Van Noten floated over a pinstriped suit. The doubling of feminine and masculine felt like A Statement (he offered beauty versus aggression, though that sounded a little on the reductive side).

Beyond those gorgeous gauzes, there was so much more plant life to celebrate: the cascade of autumn leaves down the back of a lilac coat, the roses woven into a gold jacquard, the single flower fading across a grey silk blouse. Van Noten offered the same classic grey tailoring that defined his men’s collection as a counterpoint, but where that was sober to a fault, here it had a glamour as cinematic as the models’ gilded eyelashes or the most lustrous fake furs we’re likely to see this season. With Rebekah del Rio’s “Llorando” on the soundtrack, the inevitable association was “Mulholland Drive,” David Lynch’s unimpeachable paean to duality. The lighting had a touch of Lynch too. But Van Noten insisted that was all to do with the emotional response he was after. And this time, he got it.