The ghost of Yves Saint Laurent was present on the catwalk. Was it intentional? A provocation? Hard to know. But the clothing was tempting. 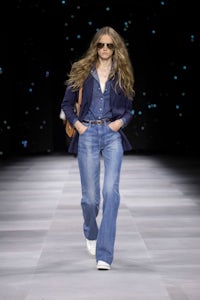 The ghost of Yves Saint Laurent was present on the catwalk. Was it intentional? A provocation? Hard to know. But the clothing was tempting.

PARIS, France — Hedi Slimane knows how to hammer an idea — again and again. Iteration and repetition are intrinsic to his trade. Tonight’s Celine show started as usual with a hypermodern play of lights and a mechanical set that changed shape until the first model hit the runway. So much futurism always makes for a startling contrast with the heavily vintage-tainted vision Slimane is shaping for the house.

It was the jupe culotte bourgeois '70s all over again, just like last season, with the addition of something slightly more bohemian: lurex peasant dresses worn with furry waistcoats and a foulard wrapped around the head; flared jeans paired with mannish blazers or blouses; more silk shirt-dresses; a tuxedo. You get the picture.

Google search for images from the era and you will see exactly that. The play between bourgeois and boho was so insistent, it looked like a study on French clichés. Such Frenchitude, of course, has been heavily shaped my monsieur Yves Saint Laurent, whose ghost was heavily present on the catwalk. Was it intentional? A provocation? Should we consider this a shared reference, now a common part of contemporary French culture, or as the heritage of a creator who shaped an era? And why do this at Celine?

The show left you speechless: everything was so obvious and blatant, you got the feeling Slimane had turned into a Dada master of shock. That said, the clothing was tempting.