The designer offered an articulate reflection on a culture of creativity that he has seen change completely, and is evolving with on his own terms. 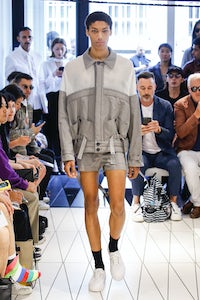 The designer offered an articulate reflection on a culture of creativity that he has seen change completely, and is evolving with on his own terms.

LONDON, United Kingdom — Hussein Chalayan’s intimate salon show (it took place in his shoebox-sized Mayfair boutique) was all about the momentum of modern life. As one of fashion’s arch storytellers, that could go one of many ways for Chalayan, but it was actually a sense of social momentum and digital communication that interested him this time round.

“It was really about reacting to digital despair,” he explained on the street outside, as his models lined up on the pavement for anyone to observe. “I wanted there to be contemplation on nature and non-digital.” Where that came through strongest was the sports-infused pieces that had a sense of the gravity, like the envelope panels hanging on by a button on a boat-neck cotton shirt or the mesh panelling on a hybrid Harrington jacket — or even gravitas, like the cobalt sweater with embroidered text messaging. “Texting with embroidery,” Chalayan called it.

“Our mass is what makes us travel,” he said. And he’s right. In a digital world, we are without a body and everything is weightless, as it’s transmitted through phone and computer screens. Chalayan’s collection was a return to the gravitational pull of fabric and the manipulation of it through pattern cutting. Sleeves were cut to thrust forward, be that by a slash cleverly cut on the bias, or a technique that allows a kimono sleeve to have a mesmerising weightlessness yet controlled structure.

He also mentioned the loss of social momentum, or meritocracy rather, as the industry has embraced nepotism — hence the emphasis on the physical weight of the person and the “shrinking of bigger personality”.

It’s all sounds very zen, but sitting in his small boutique away from the hoi polloi of buzzing show venues and retail meccas, it simply seemed like an articulate reflection on an industry and culture of creativity that Chalayan has seen change completely — and evolved with on his own terms.