The designer's tech-infused collection was a light, utilitarian study of dissected uniforms, showing off his sophisticated pattern-making and weird way with embellishment. 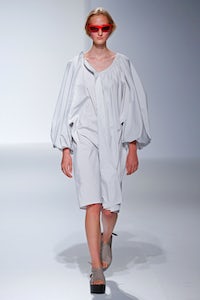 The designer's tech-infused collection was a light, utilitarian study of dissected uniforms, showing off his sophisticated pattern-making and weird way with embellishment.

PARIS, France — The cerebral designer Hussein Chalayan has always been as equally concerned with the world around us and the goings-on inside us as he is with the clothes that go on us. This season, he explored this thought-space once again, with new technologies like wearable camera belts, made in partnership with Intel, which projected videos onto the catwalk backdrop that were directly influenced by bio-tracking sensors attached to each model. Some explored perambulation, others the lifecycle of a rose. Each prefaced a new passage of his collection: a light, utilitarian study of dissected uniforms of white poplins, khaki twill, and even ruffled navy quilting.

Here Chalayan's sophisticated pattern-making shone in slinky kimono jackets or shirts unzipped at the collar to form a soft cowl or boatneck, and his weird way with embellishment executed in grid lines of strass and a sort of anti-embroidery: where those roses were obscured by dark squares of the very cloth on which they were embroidered.