The collection wasn’t the grand experimentation the designer was once known for, but it made a case for brilliantly made clothes with a strong story behind them. 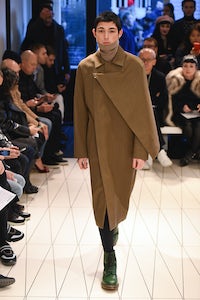 The collection wasn’t the grand experimentation the designer was once known for, but it made a case for brilliantly made clothes with a strong story behind them.

LONDON, United Kingdom — Hussein Chalayan said that he was thinking about the banlieues of Paris and the plight of refugees who arrive in the city and are subsequently sent packing. He spoke about immigration, the fear of the arrival of "others" and how we need to go beyond simply tolerating immigrants to actively embracing them in northern Europe (just as was done with Holocaust survivors after World War Two).

As far as fashion shows go, that kind of idea is heavy and could easily be construed as insensitive inspiration. When it comes from Chalayan, though, it sounds sincere. After all, this is the designer who famously staged a show in 2000 as an ode to refugees of war, who have been obliged to transplant their lives from one place to another as the world implodes around them. Back then, models dressed themselves in cushion covers, chairs became suitcases, and a table extended into a tiered crinoline skirt as gesture that meditated upon the idea of a portable home.

Fast forward almost two decades and the sense of theatricality is somewhat more subdued. Instead, Chalayan presented a wardrobe of menswear with circular panels on the left shoulder that were draped and made intrinsic to the construction of the outerwear and striped shirting. It may not sound or look like it has anything to do with refugees, but the designer said it was purposefully a looping shape to represent the idea of going forward and being pulled back, as a reflection of how refugees arrive in Europe and are sent back to dangerous territories.

Concept aside, Chalayan’s collection was compelling: there were delicious colour combinations, like fuchsia and navy, as well as tangerine, camel and primrose. North African blanket weaves in deep crimson, purple wool and cashmere were turned into artfully panelled tops. Some of the prints and pattern-cutting took cues from abstracting the aerial map of Paris’ banlieues. Shirting was quietly dramatic and the outerwear was particularly strong, especially considering that the aforementioned panels can be adapted to drape in different ways. It wasn’t quite the grand experimentation that the designer was once known for, but times have changed and it made a case for brilliantly made clothes with a story behind them.