For a designer whose clothes are steeped with meaning, this show's inbuilt design tricks accented rather than overruled the clothing's aesthetic appeal. 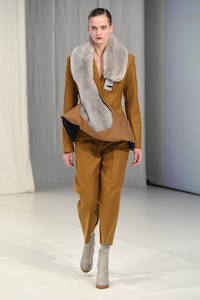 For a designer whose clothes are steeped with meaning, this show's inbuilt design tricks accented rather than overruled the clothing's aesthetic appeal.

LONDON, United Kingdom — Ever the activist, Hussein Chalayan’s authentic brand of political discontent plays out through his work season after season, so it’s no surprise that current world events have got his goat. They led him to name his Autumn/Winter 2018 show ‘Périphérique’ alluding to the outermost edges of Paris and its problems with migration. Though many designers have approached similar themes of late, few possess his subtle hand, nor the years of experience that have caused gestures of protection and cocooning to become practically inherent. Perhaps that’s why certain pieces here felt like a personal homage or a distillation of once-theatrical ideas from Chalayan’s past rendered anew, like a certain egg-shaped hood or the elegant jackets and shifts he cut in spiral patterns and warped with a gathered twist.

For a designer whose clothes are steeped with meaning, this show produced architectural garments whose inbuilt design tricks accented rather than overruled their aesthetic appeal. Though symbolising anarchy, the asymmetry of both tailoring and flou here felt both spontaneous and controlled when highlighted via shots of vermillion crepe or double-faced violet wool.

On a day where fur protests ran high (Burberry got the brunt), Chalayan’s plush faux scarves and an all-out carmine opera coat proved a rich, cruelty-free accent to the sober textiles that often let his pattern-making do the talking. Politics aside, the finale of wafting, twisted stripe dresses was as pretty as it was technically accomplished — a rare marriage in times where precise craft like his has become a disappearing commodity.