Felipe Oliveira Baptista offers another master class in managing a legacy at Lacoste. 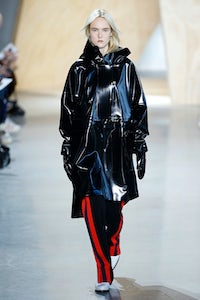 Felipe Oliveira Baptista offers another master class in managing a legacy at Lacoste.

NEW YORK, United States — In the same way that French fashion label Lacoste has stealthily become one of the most consistently pleasing presentations in New York, its creative director Felipe Oliveira Baptista has insinuated himself into the high performance sportswear vocabulary of the house to the point where the collection he showed today was as much about him as it was about the legacy of ‘the croc’.

Of course, Baptista honoured the legacy when he lifted mottos from Lacoste’s advertising in the 1970s: “100% CROCO, UN CROCODILE” for the menswear, “UNE CROCODELLE” for the womenswear — or referred to the Lacoste ski-wear sported by France’s national team in the late 1960s with branded puffa jackets and second-skin tops and unitards. But he also deconstructed the legacy too in his own droll way. The wooden set was an abstracted Alpine chalet, Michel Gaubert’s soundtrack had the cheesy tang of chalet disco. The walls of the chalet were duplicated in the woodgrain print on a parka. Baptista pixelated the croc like an icon from an 1980’s videogame. That was a smart update. He also exploded trackie-bottoms into floor-sweeping skirts, like something worn by the girls he remembered in the streets in London during the 1990s (was it Sporty Spice who favoured a long skirt with a puffa jacket?).

Actually, Baptista was all over the last fifty years like a rash. The particularly utilitarian shade of brown he used for an appropriately utilitarian jacket and pants will forever colour a corner of the 1970s. The orange PVC shirt and matching skirt were, he insisted, his nod to Belle de Jour, the French classic from 1967 whose very title is synonymous with glamorous fetishism. (PVC bonded with jersey was, in fact, one of the designer’s favourite materials throughout the collection.)

Baptista cited retro-futurism as a theme. It’s one of fashion’s favourite imaginary worlds to add a little Bladerunner/Gattaca glam to a collection. He came at it from Lacoste’s history of functionalism: a nylon suit with zip-on mitts, for instance, or the mutant variant of a jogging suit that flared up top into a peplum. An elongated hooded sweatshirt looked a little like a djellaba, except for the zip that ran all the way up its spine. The extreme volumes were, said Baptista, a way to emphasise extreme comfort. Definitive athleisure, in other words — if only that particular term hadn’t already crossed over from useful to abuseful. 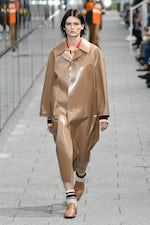 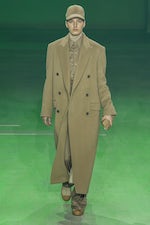 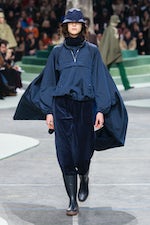 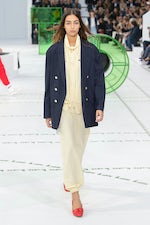