Natacha Ramsay-Levi's infallible chic left little room for a sense of the cosmic (dis)order that so deliciously underpinned her saga. And yet, there were inklings. 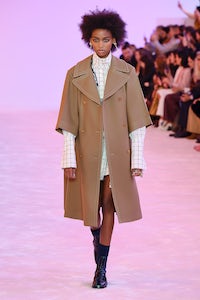 Natacha Ramsay-Levi's infallible chic left little room for a sense of the cosmic (dis)order that so deliciously underpinned her saga. And yet, there were inklings.

PARIS, France — Natacha Ramsay-Levi spun an enchanted yarn for her new Chloe collection: a woman on a volcanic island, grounded in primal nature, dark ocean swirling around her, the Aurora Borealis illuminating the heavens above. A good narrative entrances a modern fashion audience. In NRL’s case, it also helped her shape her collection. She insisted she had the story in mind from the start.

But a designer’s inspiration dwells deep inside her own mind. On the evidence of the clothes she showed, her audience on Thursday couldn’t have been aware of the primal ebb and flow that drew Ramsay-Levi hither and yon. Her infallible chic also left little room for a sense of the cosmic (dis)order that so deliciously underpinned her saga.

And yet, there were inklings. Chloe was a quarter-century waystation in Karl Lagerfeld’s insanely protean career. Postcards on everyone’s seats reprinted some of his aperçus. “My dresses are…made to transform everyday life into a fairy tale, to create an atmosphere at every moment.” You had to suspend your disbelief to imagine Ramsay-Levi’s woman on her island, earthy in her shirtdresses, shearlings and Western-styled denims, gradually being taken over by something filmier, more elemental, with clumps of sequins like starlight, or sparkling water. She mentioned Emily Brontë. OK, “Wuthering Heights” is the all-time classic story of a woman unhinged by emotion. But Ramsay-Levi also namechecked Florence Arthaud, the French sailor who won the Route de Rhum, the singlehanded transatlantic race, in 1990, and died, aged 57, in a helicopter crash in 2015.

Pioneers, adventuresses, lovers…practical women, emotional women, strong women. So the clothes spoke of functionality, tempered by the romance of fluttering hems, camisole details and billowing sleeves. The accessories added a talismanic edge with horn, sharkstooth, amulets, like the Chloe girl was a clanswoman on her island. One of the most subtly striking touches in the show was the models’ lips, the variation in colour from bare to stained dark suggesting a multitude of personalities. The semiotics of lipstick? Academia awaits that thesis proposal.