Dior's Quintessential England: the Rain, the Train and a Grand Country Home

At Blenheim Palace, where Dior staged its Cruise 2017 show, grand old traditions — both French and British — collided with peculiar compatibility. 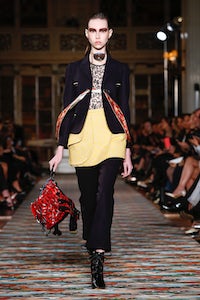 Dior's Quintessential England: the Rain, the Train and a Grand Country Home

At Blenheim Palace, where Dior staged its Cruise 2017 show, grand old traditions — both French and British — collided with peculiar compatibility.

WOODSTOCK, United Kingdom — Maybe it’s the nature of Resort — or Cruise — collections, with their promise of transport from the everyday, that is driving fashion’s titans to globe-skipping oneupsmanship. Or perhaps it’s a canny acknowledgment that millennials allegedly crave experiences rather than mere material satisfaction. A helicopter ride over Rio’s statue of Christ the Redeemer, say, as an appetiser to Louis Vuitton’s show in Rio. Or a joyride through Old Havana in a finback Caddy before settling into Chanel’s presentation. Or, in the case of Dior’s resort collection today, a journey on the fabled Orient Express through the English countryside to Blenheim Palace, one of the most magnificent stately homes in the UK.

A potentially extraordinary experience, until the sheer Englishness of it all conspired to underscore the ordinary. The train was late, there was a logistical logjam or two (“As bad as the NATO conference,” quipped one of the drivers who ferried guests from the station to the house), and the driving rain obliterated any appreciation of Blenheim’s very great outdoors. So the presentation itself ended up feeling like a very rushed in-and-out affair, which was a shame when there should have been so much to appreciate, not least the piquant irony of one of the greatest French fashion houses mounting a show in a palace that was John Marlborough’s gift from Queen Anne for his victory over Louis XIV in the early 18th century War of the Spanish Succession.

Lucie Meier and Serge Ruffieux's tenure paints them as something more than mere placeholders for whatever marquee name emerges from the selection process for Simons’ replacement.

Except that it wasn’t like that hadn’t already happened. Ardent Anglophile Christian Dior showed a collection at Blenheim in 1954. So did his successor Yves Saint Laurent in 1958. Besides, Dior’s current design team is headed by Lucie Meier and Serge Ruffieux, both conveniently Swiss. Neutrality would seem to be an added plus in their cases. They have been holding the fort since Raf Simons’ departure, and, at this point, their continued tenure paints them as something more than mere placeholders for whatever marquee name emerges from the selection process for Simons’ replacement.

In fact, logic would suggest that, in an era when instability reigns, Dior may have recognized that the power, the seduction of the brand lies in the unbeatable authority of those four letters, D, I, O and R, rather than whatever hotshot is brought in from outside to run things. Always reliant, of course, on the fact that whoever is in charge of the design studio colours inside the lines.

Meier and Ruffieux managed that with a collection which found a peculiar compatibility between the French codes of the house where the clothes were created and the English codes of the house where they were shown today. It was most obvious in the way images of an aristocratic riding to hounds were woven into jacquards, more subtle in the languor of long, sinuous, silk crepe tea dresses, which felt like the sort of things the Mitford sisters might have worn to country house parties in the 1940s.  The ruching and draping certainly aided that impression.

There was something in the clash of pattern and embroidered texture which hinted at exotic fabrics brought home as souvenirs by stylish travellers in the past, but it felt equally like the kinetic originality of adventurous dressers now. (One reference plucked from the passing parade of very particular proportions — puffed sleeves, cropped, flaring pants — was J.W. Anderson, an influential young star in the LVMH firmament.)

The Dior-ness was addressed, as usual, by the presence of the bar jacket, with Meier and Ruffieux continuing Simons’ relaxation of the iconic item. They used the skirt of the Bar as a wraparound peplum over flowing skirts or pants, a striking trifurcation. Christian Dior liked to give his womenswear a crisp masculine edge with the fabrics he used. Here, there were tailored coatdresses in a dry wool or cotton tweed. Trailing silk foulards were another menswear detail.

English eccentricity was invoked in the shownotes, but that was over-egging the pudding a little. Rather, there was a sense here of clothes just dressy, intelligent, ornamented and relaxed enough to sustain the label D-I-O-R for now. 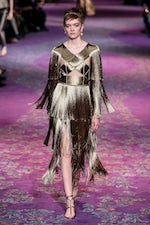 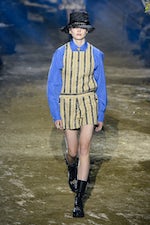 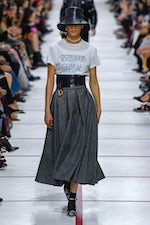 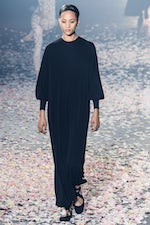 Spectacle and Intensity at Dior