The designer drew on fetishistic emblems, more direct in his eroticism than ever. But these were serious clothes for serious times. 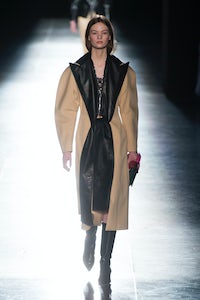 The designer drew on fetishistic emblems, more direct in his eroticism than ever. But these were serious clothes for serious times.

LONDON, United Kingdom — Sex and its relationship to power are currently touchpapers in the fashion industry, but sex has been the tentpole of Christopher Kane’s career since that notorious graduate collection with the Versace chainmail. He’s approached it in so many ways: oblique, obtuse, ambiguous...scientific. Maybe not until the collection he showed on Monday afternoon had he been quite so straightforward. Kane closed his show with a layered shift trimmed in pink marabou, printed with a Chris Foss drawing from “More Joy of Sex” of a couple enjoying the 69 position. It was one of three looks that used Foss’s illustrations. They came at the end of a show that had employed a very adult eroticism as its launchpad.

Kane likes to provoke. His collection drew on fetishistic emblems: black leather, as a lapel/scarf in the first look; black lace as a lingerie trim; red lace as a tiny little dress; the zippers that opened a huge sweater dress or a leather jacket. Sleeves were articulated, like armour, on an oversized herringbone coat/dress. It felt like the designer was making a statement about the ownership of female power. The shoes helped: spring-heeled orthopaedic numbers produced in collaboration with Z-Coil. Butt-ugly but they’d guarantee you stood up straight.

If Kane was being more direct than ever, it showed in the shape of the collection, everything either fitted to the body or revealing it with slashes and sheer. And there was no flimflam with the colour palette. Dark, with metallic flashes. Kane has always excelled at sly humour, but there was something that didn't allow that here. These were serious clothes for serious times. One model clutched a bag that read More Joy, like the book. Was it a statement or a plea?