The designer based his collection on “beauty expired, dead and thrown away.” 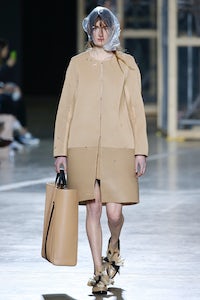 The designer based his collection on “beauty expired, dead and thrown away.”

LONDON, United Kingdom — “The darker the subject, the better the conversation,” declared Christopher Kane after his startling show on Monday. Which means there must have been a lot of good chat in the Kane household last night, because he went dark for Autumn/Winter. The idea of decomposition has already been raised in London this season. Kane based his collection on “beauty expired, dead and thrown away.” He was thinking of the women he and his sister Tammy encountered when they worked in a home. Once scientists or teachers or people of accomplishment, they were now, he said, “the forgotten women, outsiders, hoarders, stuck in their own time.”

The sadness of that thought inevitably infected the clothes. One outfit featured a muddy-coloured cardigan trailing a dead rose, over a slip dress featuring a print of more flowers mixed with crumpled plastic bags. The lace hem of another slip dress was coming away from its skirt, but the big fur stole that wrapped the model spoke of vestiges of glamour. The finale showcased dresses that dissolved into streamers like shredded paper, decked with fake flowers and tassels.

The same make-do spirit infused the ostrich feathers (salvaged from a thrift shop?) that trimmed sinuous black duchesse pieces, or the earrings, brooches and necklaces, the contents of an old jewellery box, that dangled from coats and dresses like talismans. You could picture a hoarder alone in her room applying herself diligently to such ingenious homemade decorations. “Yes, it’s a bit voodoo,” Kane acknowledged. “She’s a bit of an alchemist. I can imagine her with tarot cards.”

Do these outfits sound difficult? They were. As hard as Simon Halsberghe’s soundtrack of German electropunk from the 1980s. “Why do clothes that people have seen before?” Kane mused. The opening look – a coat in camel leather stapled and corrugated like the cardboard a “forgotten woman” might find herself sheltering under – certainly filled the requirement of the previously unseen. It was odd, but it was elegant, like so much else on Kane’s catwalk. So in the end, he did manage to bestow a kitchen-sink dignity on his lost heroine. 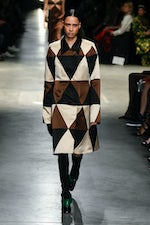 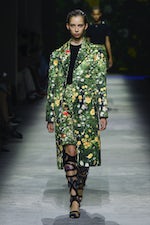 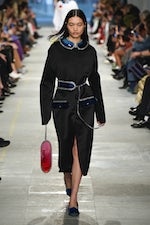 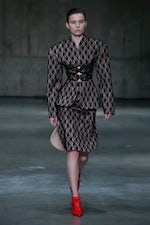