Even after a particularly high profile decade in the business, Kane still thinks and works like a young designer, constantly questioning what he is doing, and rarely coming up with easy answers. 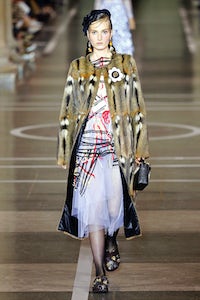 Even after a particularly high profile decade in the business, Kane still thinks and works like a young designer, constantly questioning what he is doing, and rarely coming up with easy answers.

LONDON, United Kingdom — It’s Christopher Kane’s 10th anniversary, but rather than celebration, there was a pervasive melancholy in the collection he showed on Monday. Kane is fiercely aware of the context of his work. Showing the day after a bomb had gone off in Manhattan, he claimed that such events made him question what he did. He also said he’d chosen his location, Tate Britain, precisely because it still bore the scars of bomb damage from WWII.

And that’s where reflecting on his own past had taken him, back to the time when the resourcefulness of the British in the face of the Blitz became an enduring symbol of the national character. “Make Do and Mend” was the motto of the moment then, and the same idea has played a part in Kane’s career, no notion too humble to remain un-elevated by fashion alchemy.

The footwear in his latest show was Crocs, for goodness’ sake, gilded and studded with mineral stones polished to a dull, jewel-like gleam. Tear sheets of collections over the years were lifted off the walls of his studio and printed on silk squares, like handkerchiefs, which were attached to dresses (imagine that as a cost-effective and ingenious way to add a decorative element to an old item). Making do for Kane also meant revisiting his MA collection at Central Saint Martin’s. He reproduced the tiny, sheer little things that first snagged the world’s attention, changing only their colour.

There were outfits that looked like pieces of a dressmaker’s pattern reassembled with rings instead of seams. You might think of them as a comment on the creative process, because one thing that really stood out on Monday was how, even after a particularly high profile decade in the business, Kane still thinks and works like a young designer, constantly questioning what he is doing, and rarely coming up with easy answers.

He has never been frightened of the difficult or the ugly. Those “pattern” dresses suggested something barely hanging together, for instance. And the cutaway dresses with sheer panels revealing bra and big pants underneath were well in keeping with his fetishistic tendencies. Sometimes they have produced items of odd beauty — here, the black leather coat with the broderie anglaise trim was one example. Other times? Just odd. Grandpa’s cardigan in lurex over grandma’s skirt in latex leopard-spot, anyone?

A sweater bore the rubric St Christopher Be My Guide.  Guests received a Catholic prayer card and medal, reminders of Kane’s upbringing in Glasgow, close to the Carfin Grotto, the Scottish version of Lourdes.  The search for spiritual guidance, the quest for redemption… he called it looking for “beauty in darkness.” Maybe that’s what kickstarted the melancholia.  On the soundtrack, The Promised Land, Joe Smooth’s poignant house classic,  amplified the mood. Perverse when Kane himself seems so happy and loved up. But when was he not perverse? I left him wondering whether maybe he’s just saving the dark side for his work now.