While the designer’s debut Givenchy collection revealed a surprising compatibility, there was the strongest suspicion that she was holding a lot back. 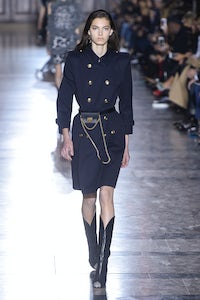 While the designer’s debut Givenchy collection revealed a surprising compatibility, there was the strongest suspicion that she was holding a lot back.

PARIS, France — In Givenchy’s long and curious roster of creative directors, from John Galliano and Alexander McQueen through to Riccardo Tisci, it’s probably significant that the only one who ever actually met with Hubert himself is the latest, Clare Waight Keller. Now 90, he confirmed the impressions she’d garnered from a trawl through his original sketches in the archives. He loved a strong shoulder, a sharp pleat, a minimal palette, with the emphasis on black. A four-leaf clover was a favourite print, for good luck. Plus animal patterns. And, as far as Hubert was concerned, everything started with haute couture.

Waight Keller can’t start there – her first couture collection is on the slate for January – but everything else the old master told her revealed a compatibility that came as something of a surprise. “There was a real comfort zone in what he stands for,” she said during a preview earlier this week. “The parallels gave me the vision to go even stronger in that direction.” Meaning, a defined shoulder even when tops were sleeveless (there was a small pad, “something that brings the silhouette down from there,” she called it); panels of knife pleats animating asymmetric skirts; a scattering of clover and zebra; and a generous scoop of little black dresses.

She felt she’d inserted her own personality with the collection’s flou, echoing the free-spirited festival girl she was so partial to in her previous gig at Chloe. Waight Keller adapted it for her new position. “Putting the shoulder in brought the flou to a more powerful place,” she said, more suited to Givenchy’s innately urban tone.

But the most fundamental change she has wrought was the complete integration of Givenchy’s men’s and women’s collections. It makes commercial sense. Under Riccardo Tisci, both businesses were equally strong. Waight Keller also thinks it reflects something essential about boys and girls in Paris. “They’re very sexy together, even when they’re in restaurants.” She wanted to create characters with her menswear. She clearly managed at least one: the consummate Parisian boyfriend. You could almost picture him as the better-behaved younger brother of one of Hedi Slimane’s bad boys. His girl would probably be wearing one of Waight Keller’s striped tops and leather minis. “My view of modern togetherness” was how she described the symbiosis.

Yet, when she talked about Hubert de Givenchy and Audrey Hepburn, the most famous designer/client relationship in fashion history, she acknowledged that, even if they loved each other, they couldn’t be together. And she found the tension of apartness inspired her like the togetherness did. You might have wished for more of that contrary edge in Waight Keller’s debut. It wasn’t exactly that she was deferential to house tradition, but she was definitely observant. And there was the strongest suspicion that she was holding a lot back. The invitation to the show was a big plastic envelope, empty. That was cryptic enough without the other envelope that waited on every seat inside the Palace of Justice. It contained a sheaf of blank cards. Maybe the future will fill them in.