While Stuart Vevers is quite proud of the progress Coach has made in ready-to-wear, it is still first and foremost an accessories brand. This season’s shrunken frame bags were some of the strongest he has turned out. 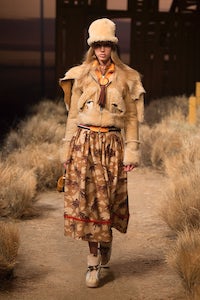 While Stuart Vevers is quite proud of the progress Coach has made in ready-to-wear, it is still first and foremost an accessories brand. This season’s shrunken frame bags were some of the strongest he has turned out.

NEW YORK, United States — The set at Coach today was straight out of the Dust Bowl, with tumbleweeds lining the runway and models walking out onto the stage through a house frame as rackety as Dorothy Gale’s. Stuart Vevers said he wasn’t necessarily thinking of the Wizard of Oz when he was designing the collection — Terrence Malick’s Badlands and Days of Heaven were top of mind — but he recognised its spirit when surveying the end results.

Vevers has been living in New York while leading the transformation of Coach for three years, but his idea of America remains very much rooted in the imagery he was exposed to long before his arrival.

Season after season, Vevers has tapped into one teenage tribe or another, whether it was the rockabilly girls of the 1950s or late 1970s skate kids. For the most part, his novel approach has proven successful, repositioning Coach as an inclusive, youth-driven label. He has even managed to turn a totally arbitrary dinosaur motif into a brand’s mascot named Rexy. But with success comes maintenance. Today on the runway, a leather tote was embossed with Coach’s classic horse-drawn buggy logo, which felt a little uncool.

That misstep aside, Vevers wholly delivered. For Autumn/Winter 2017, the 1930s emerged through calico tea dresses embroidered with black-sequin cherries, undone shearlings and buffalo-check dirndl skirts in dusty pinks, yellows, purples and tans. But that was all twisted with references to 1980s hiphop, best illustrated through the oversize puffers in upholstery florals. The concept — as one front-row friend pointed out — channeled the spirit of great American designer Anna Sui, whose prairie girls helped to define her brand. (Perhaps it was fitting then that the Smashing Pumpkins’ “1979” — released in 1995 at what was arguably the height of Sui’s influence — led the soundtrack.)

While Vevers is quite proud of the progress Coach has made in ready-to-wear, it is still first and foremost an accessories brand. This season’s shrunken frame bags — a nod to legendary Coach designer Bonnie Cashin — were some of the strongest he has turned out. The shoes, like a moon boot-sneaker hybrid decorated with fringe on the back of the heel, were far-out and fantastical.

Each layered-up look had what felt like several hidden Easter eggs: ric-rac detailing on a floral dress; poppies pasted on a teeny cross-body coin purse; plush burgundy velvet peeking out from a pair of flatform slides.

Vevers has made shopping at Coach fun, and this collection — which also included a few complementary men’s looks, as the brand plans on showing the two lines in tandem from now on — may have been the best illustration of that to date.