LONDON, United Kingdom — We have waited a long time and it may be too early to get very excited, but could London Collections: Men be about to deliver what London womenswear has singularly failed to do? That is, to find, nurture and promote one or two designers worthy to follow the path beaten so successfully (and so very long ago) by Vivienne Westwood, John Galliano, Alexander McQueen, Hussein Chalayan and Christopher Bailey, instead of flooding fashion week with nonentities in an attempt to fool the world that the current batch of minnows are shiny, svelte salmon. Women's fashion in London has traditionally crept along, following the lead of Paris, whereas men's dress was virtually invented in London, its traditions going back to the eighteenth and nineteenth centuries. But despite Carnaby Street and all that followed, it began to lose its way because nobody was pushing it. Today, that has changed. London now has a fledgling male fashion scene that could soon lead the world, if handled correctly. All I can say is, 'Thank God, but what took you so long?' Before we look in detail at what was on show in London last weekend, it must be admitted that the patron saint of London men’s fashion is not British at all. The move to modernise came from America — and quite a long time ago now — in the work of Thom Browne, the one pure male fashion designer of the last decade. Without his courage and vision, menswear would not be in the strong position it is capable of assuming today. Add the London cheekiness and 'in yer face' confidence — let's not forget that Charles Dickens’ Artful Dodger was born of the city, where his progeny are alive and well today — and we have a formula. 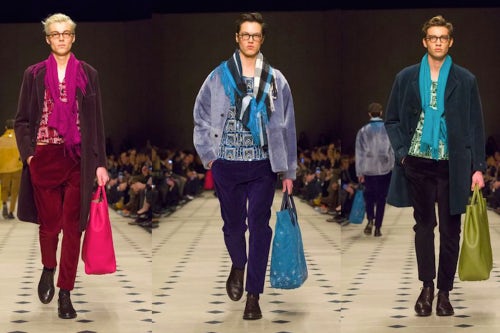 Let's begin with Burberry, a label that under Christopher Bailey's leadership has become a tried and tested bridge between Savile Row and the wilder shores of Shoreditch. Nice clothes for nice guys who want to dress young but not freakily. This season, I felt that Bailey showed the confidence that, due to all of the upheavals and changes in the company, has been lacking in the last couple of seasons. There was a sense of pastures new in the strong sense of colour, the sparkling mirror glass on Indian-inspired scarves and even jackets, and the teddy bear coats and ponchos — next winter Burberry boys will be kept very warm as well as stylish, though the skinny silhouettes preclude them eating much that might keep out the cold. And Bailey is from Yorkshire, the home of defensive eating. 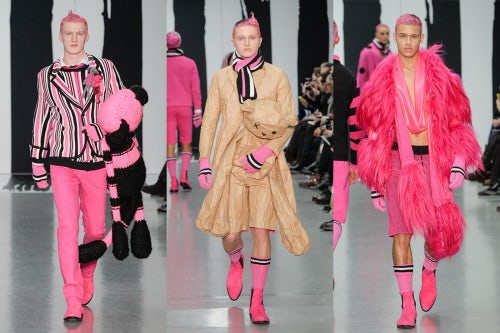 If Burberry is the voice of Middle England in fashion terms, it is the wild boys who have all the fun. I am a sucker for irreverence and cheek and that is why I was delighted to see Sibling’s runway awash with muscular young men wearing shocking pink — and clearly loving it. Actually, it was more than wearing it. They looked as if they had been dipped in a vat of paint seconds before coming onto the runway. A clever, attention-grabbing idea? Certainly. But also there were plenty of ideas that will surface in the high street very soon. If Sibling was all a bit twinky, Patrick Grant's E. Tautz collection was all about grown up men. Sombre palettes and traditional cuts were slightly subverted to make a powerful statement that exposed the history behind the designs, whilst being entirely modern. Northern grit and history, encapsulated in a collection that will find an answering cord in men of all ages and persuasions, but, judging by the quality of the cut and fabrics, of rather deep pockets. Patrick is increasingly worthy of standing shoulder to shoulder with the Mother Teresa of London fashion, Margaret Howell, who's integrity and authority stand out not through shouts, but soft, subtle whispers. This season, she gave us narrow sweaters unadorned on the front but with just one line of colour at the back — and in that she said everything that needed to be said. Mother Teresa? Yes, for her honesty, modesty and constancy. She is a national treasure. 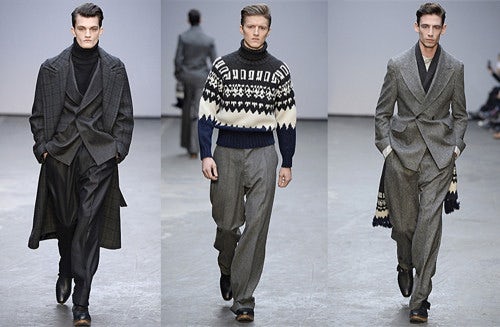 And so is Paul Smith in a very different way. Creator, entertainer, and born showman, he is a true 'out of the box' thinker and this season he concentrated our minds on one suit (‘a suit to travel with,’ the slogan went) and that is all he showed. But to demonstrate its durability he not only kept removing the jacket of the one he was wearing and scrunching it up to show how it does not crease, but the presentation consisted of a group of acrobats whose performance was jaw-droppingly dangerous-looking and gave ample proof that this suit can take a lot of rough treatment and still come up smiling. Not unlike its designer. 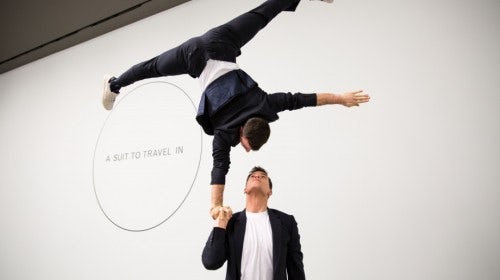 And not unlike Tom Ford, who also eschewed a runway presentation for a hands-on approach. White platform and screen, huge lights in a pure, empty space, and Mr Ford as master of ceremonies for a lightning-fast presentation with commentary by the designer himself. Quick, stylish (what else could it be?) and very wearable clothes, both casual and formal, were whisked on stage and off again in less than a minute, with the next lot waiting to come out after them. The clothes were beautiful, the cut razor precise and the Op art hologram jackets were marvellous fun, for those with the courage.... 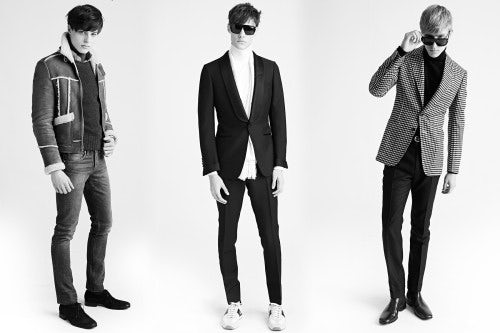 But the two highlights of the shows were rather more earthy. One from a world famous design label; the other from a newish name, they summed up what London should be and is becoming. The first is, of course, Alexander McQueen. Like several collections in London, it was sombre but also rich in imagination and references. Also like others, it looked to World War I and the early days of the twentieth century. Quasi-military in feeling, it was so directional that the fashion industry could feed off the ideas for years to come. Sombre colours, a military cut, modern proportions and total masculinity made this collection a tour de force of which London should be proud. And so, to the really exciting one. The designer who already is looking as if he will soon be worthy of a place on the plinth next to Alexander McQueen and John Galliano, twin heroes of all that London fashion is about. He is Craig Green, of course. The comparatively new boy on the block (he graduated in 2012 from Central Saint Martins), you would not know it from this consummate collection, which reminded me a lot of the thinking that informed John Galliano’s very early menswear. Proportions, layers, shapes, colours — an incredible green, so deep it was almost black, and a zinging scarlet — it was all there, for now and the future, by which I mean that Green has already worked out who he is and what his clothes are about. The essential for any great designer is his personal focus, which will inform and make recognisable everything he does in the future. In my experience, many designers never get to that point. But Green already has something looking like a classic to his name — his boxy, rather square jacket that will be with him in one way or another throughout his career as his signature piece. As he has already suggested in interviews, it will be the beginning of every new collection he does. This season, it looked both architectural and sophisticated in its slightly padded form, which was so confident and understated that it could have come from Alaïa or Vionnet. It is always dangerous to predict a glowing future at the outset of a career in fashion, but I am pretty well convinced that in Craig Green we have a talent that will make him a leader on the London fashion scene.