Clare Waight Keller has clearly found her happy place, bringing extraordinary technique, exquisite detail and extravagant volume with such a sense of purpose that resistance was futile. 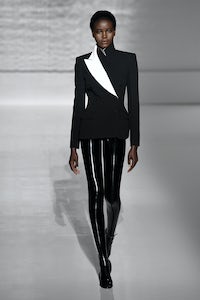 Clare Waight Keller has clearly found her happy place, bringing extraordinary technique, exquisite detail and extravagant volume with such a sense of purpose that resistance was futile.

PARIS, France — The loveliest thing about Clare Waight Keller is the sense of wonder she exudes about where she is and what she does. “I’m loving it so much,” she gushed after Givenchy’s couture show on Tuesday night, and it almost sounded as though she couldn’t believe her own good fortune, like Charlie with a golden ticket to the chocolate factory.

For all her years in the women’s trenches, Waight Keller’s roots are in menswear, which she proved with the succinct but accomplished men’s collection she presented last week. Designing haute couture for her is a passionate fantasy, and that's why her show touched on everything you'd hope for if you had the ultimate resources to realise that fantasy: extraordinary technique, exquisite detail, extravagant volume and colour. She brought all of this and more, and she did it with such a sense of purpose that resistance was futile.

There was something slightly academic and offputtingly big about Waight Keller’s last couture show, the one where she paid homage to Hubert de Givenchy. Maybe she recognised that deep down inside, because this time, she talked about taking a step away and starting where she wanted to start. She called the collection Bleached Canvas, and presented it in a big, blank, white cube, so that nothing would distract from the pure drama of the clothes. It was intensified by the soundtrack, Montserrat Caballé’s soprano soaring through Tosca.

“I wanted to make the shapes exquisite,” Waight Keller explained. “Every technique was engineered for shape.” And shapes there were, from second-skin sleek and a frenzy of fringing to capes and a full billowing sail of acid yellow lace. The collection was unified by the designer’s drive for modernity. She took the bow, a classic couture trope, blew it up to ludicrous proportions — and stuck a backpack on it. Take that, minaudiere!

Or she made latex a surprising foundation. “It’s my couture leather,” Waight Keller waxed lyrical. “Second skin, super-modern, super shine, incredible colour, sensuality…” Latex was the black trousers Adut Akech wore to open the show, with a black jacket whose single white lapel you could cut your finger on. Latex was the vermilion capelet on a red lace dress, the vermilion body under an oily black lace halter. And it was a single ultraviolet armlet, like the model had dipped her arm in a bucket of Yves Klein’s highgloss paint. Contrast it with the more couture-y lacquered lace, the fringed organza, the coq feather fronds blurring the definition of a little pearl-studded top and the latex seemed quite perverse. That might have been Waight Keller’s most trenchant insight. Contrast creates dynamism.

There were a handful of men in the show. One wore a black lace frock coat, another was in a suit of oyster satin. There was also menswear in the form of a tuxedo dissected into the bare bones of a scoop-necked top or a halter neck. Thinking about this later, it occurred to me that, while the collection was grand in presentation, it was actually refreshingly stark. Or perhaps I should say pure, a more pleasing complement to modern. Either way, Clare Waight Keller has clearly found her happy place at last.