At Proenza Schouler​, the clothes were stitched, belted, laced and sutured together, simmering ​with the unresolved tensions that ​designers must face every day.​ 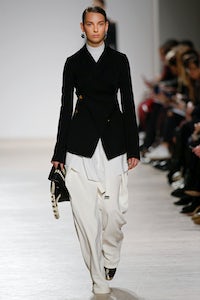 At Proenza Schouler​, the clothes were stitched, belted, laced and sutured together, simmering ​with the unresolved tensions that ​designers must face every day.​

NEW YORK, United States — “We left things broken, now we’re fixing them.” Lazaro Hernandez was talking about last season vs this season for Proenza Schouler. So this time round, deconstruction became reconstruction. The clothes were stitched, belted, laced, sutured together. But not all the way. One coat was laced tight to a nipped waist, then the lacing stopped and the skirts of the coat flared. “Control and release,” the designers called it. The unravelling lace was the leitmotif of the collection. “Fuckedupness,” Hernandez murmured.

The wrongness extended to a coat scrappily patchworked from rabbit, and a shiny black pleather coat top-stitched in white. “The wrong kind of fur, the wrong kind of leather,” Jack McCollough said gleefully. Why so wrong? Because they were insults to fashion orthodoxy, deliberately cheap in a category that would normally be classified as luxury. Just like the tops stitched together from panels of knit, deliberately too small so, to make yourself comfortable, you’d have to tug and stretch and worm your way in. Then there were pieces that had been garment-printed, crude-looking and, again, deliberately so, as were the dresses stitched together from bands of fabric that were coming apart at the seams.

If this was Hernandez and McCullough’s idea of release, it also felt like they were flipping the bird in a way — their clothes were just barely holding it together, maybe they were too. We’re all fully aware of the burgeoning pressure designers are under to produce more and more with less and less time. “We have to embrace the pressure,” Hernandez acknowledged ruefully. But that doesn’t mean they have to like it, and this collection simmered with the unresolved tensions that they and their peers must face every day. One way to deal? Let it go. Let the laces fly. We’re familiar enough with fashion as a mirror. Fashion as a metaphor is equally rewarding food for thought.

The last bandage dresses were made of fil coupé, stripped and touched with beads here and there, so there was the merest suggestion of glitter. The effect created was of advanced decomposition. The reconstruction was over. 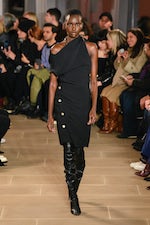 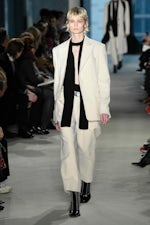 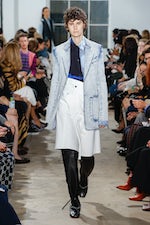 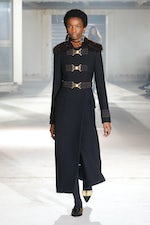