Save for exceptions like Gucci, Fendi, Damir Doma and Giorgio Armani, most of the labels showing at Milan men's fashion week ditched creation for product design.

Save for exceptions like Gucci, Fendi, Damir Doma and Giorgio Armani, most of the labels showing at Milan men's fashion week ditched creation for product design.

MILAN, Italy — The severely slimmed-down calendar and the general sense of anticipation for what comes next gave Milan an eerie air. The men's fashion week, which has just come to a close, seemed trapped in a time warp. The time we spent simply waiting — for a show to start, for a car stuck in traffic, for an unexpected fashion epiphany — seemed to pass even more slowly. There were holes in the schedule that showroom visits and the Camera della Moda's not fully-formed attempt at promoting young talent simply couldn't fill.

This gave this reporter the impression of living a sort of surreal long weekend, not a proper fashion week. The feeling has nothing to do with the length of the schedule, of course: when there is strong content, even a couple of days are enough, concision is powerful.

In Milan, instead, save for a bunch noteworthy exceptions — tellingly, Gucci's painstakingly-wrought travellers through space and time, Fendi's bon viveurs caught moving and sunbathing around a Mediterranean pool, Damir Doma's brutalist posse of warrior poets and Marni's bookish rebels, but also Giorgio Armani's gloriously deconstructed machos — it looked like most designers and fashion houses have given up their role altogether, ditching the pursuit of genuinely new ideas for mere product design. I mean bland, predictable, repetitive product: something that really does not deserve the catwalk, but that will easily sell. 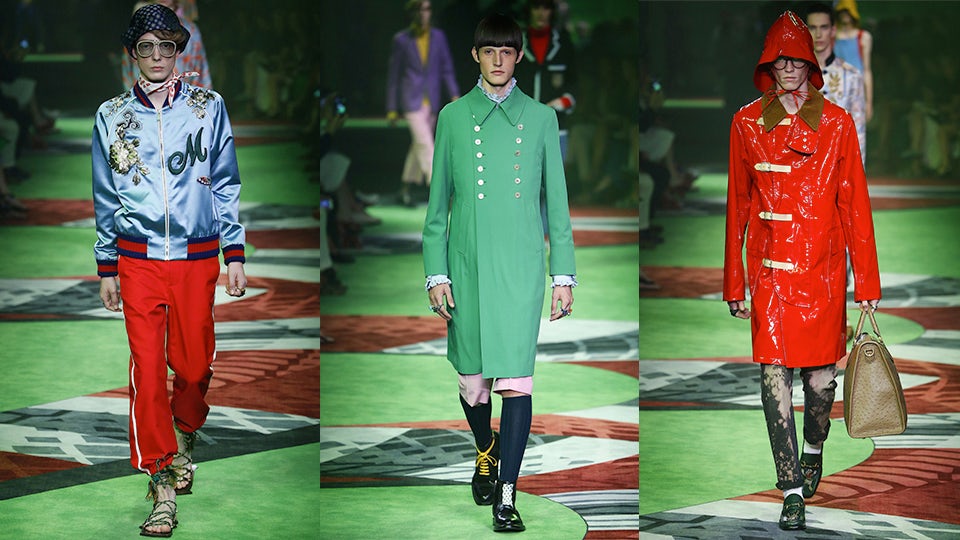 It is an old debate: creation versus commerce. For the moment, it's the latter that wins, in ways that are not particularly inspiring. It made for a slightly boring, eminently predictable offering that put a giant question mark on the whole idea of men's fashion weeks — in Milan, as well as elsewhere. Because, you know, product is good, but a show requires a little more effort. Otherwise, it's better save the budget for other initiatives.

With the global fashion week system currently under scrutiny and in search of new solutions, the utility of men's fashion weeks, and with that men's fashion shows, is under debate. For brands with a strong and impactful message the catwalk show remains, even in this hyper-connected and visually rabid era (or probably because of it), the number one medium to fully convey an aesthetic. A show generates an avalanche of videos, images, post, tweets that drive the media cycle. For others, let's say weaker protagonists, a catwalk show can backfire and dilute a brand's magic rather than amplifying it. 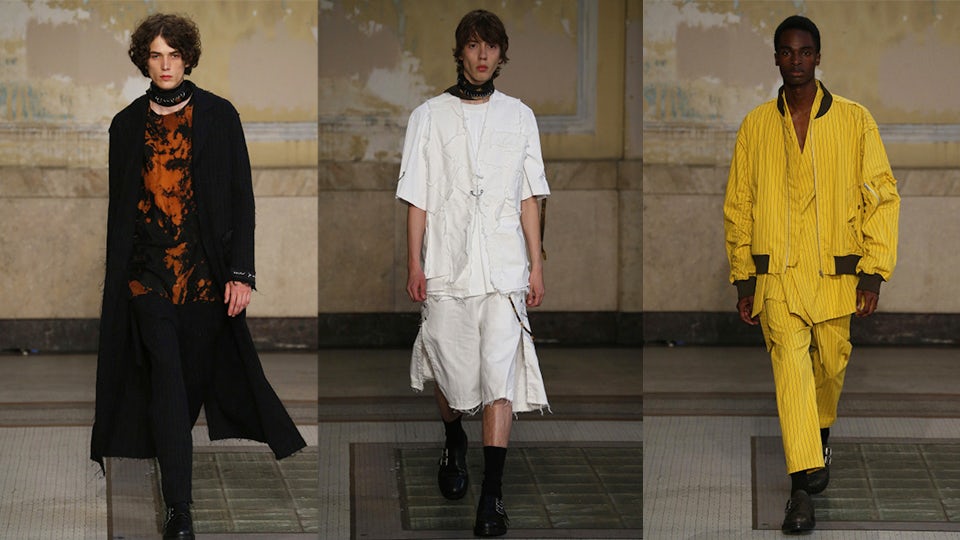 This was the case of Boglioli, for instance, where the talented Davide Marello is giving a wholly new meaning to the house's brand of soft tailoring. Marello has an eye for enchanting locations that enhance and frame the exquisite subtlety of his work. The well-to-do school he chose this season was a gem. Yet, inside the rooms, the painterly tailoring somehow disappeared, and the beauty of the details got lost. Marello thinks that a show is good even if it simply takes guests in to a beautiful place. Maybe, he should have created an immersive installation instead, something more atmospheric. The medium is truly the message, and the show, nowadays, cannot be a mere trunk show, however poetic.

Other designers — No. 21's Alessandro Dell'Acqua, Andrea Pompilio, Antonio Marras, Ermanno Scervino — skipped the catwalk extravaganza altogether, opting for showroom presentations with clothes on a rack, or models around. For Pompilio this is the second season not showing, and the designer said it was a well-received decision. Marras and Dell'Acqua will include a florilegium of men's looks in their women's show in September.

While the showroom visit is certainly enlightening and insightful, it poses a number of questions, both practical and conceptual. For a start, it makes the schedule extremely fragmented and unnervingly complicated, but it also has the strange effect of bringing back designer fashion from image-making to clothes-making. Which, someone might object, is the true essence of fashion making. Now more than ever before it's the narrative that makes a product engaging, and that needs emotional media. In other words, the showroom format is good to evaluate the product, but somehow reduces the global picture, making the action a little narrow. 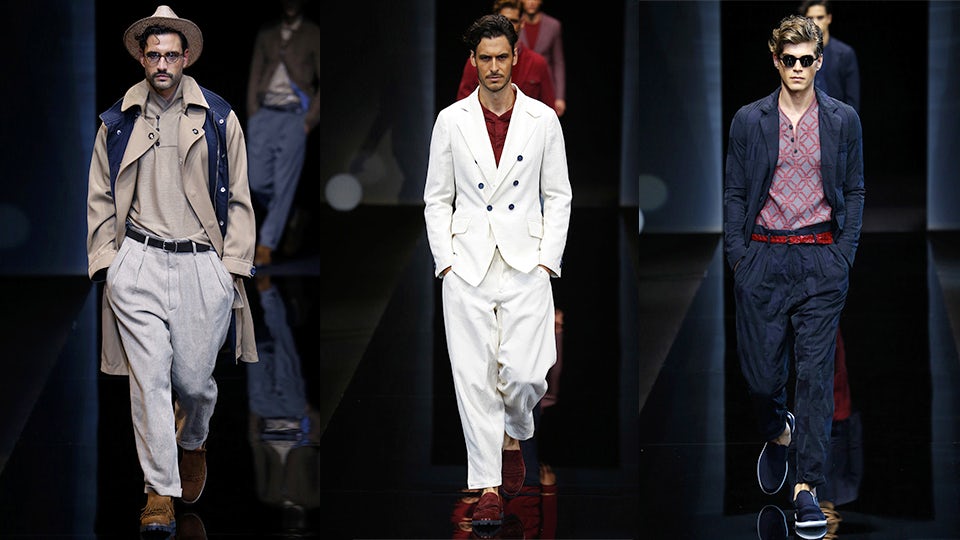 For sure, these are uncertain times. Despite the grandness and the lavishness of the appearances, fashion brands are often suffering severe cuts in their sales. Some markets might be booming, but many are not. The solution? Going back to their roots, rediscovering their heritage and the essence of a brand, in the hope this will bring customers back.

Ever the pragmatic designer-cum-entrepreneur, Giorgio Armani, for instance, declared after his very Armanian show of weightless tailoring with a slightly exotic tingle, "Convincing people to buy is hard, so better offer giving them something they want to buy." He delivered the goods, showing once again a consistency that is commercially and conceptually winning. 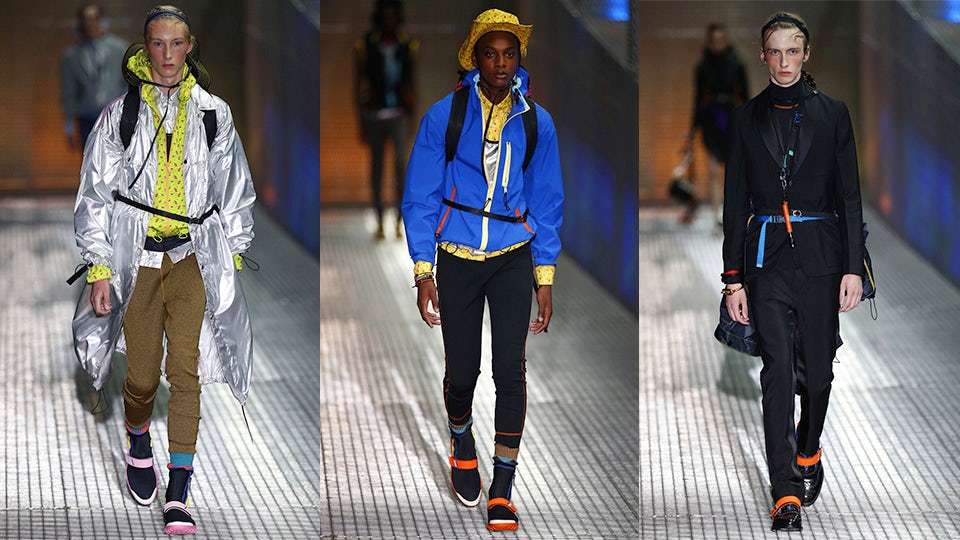 A brand which is surely suffering is Prada. In an attempt to regain the cool factor which has been slightly obfuscated in recent years, Mrs Prada went back to the origins of it all: the black nylon backpack, inflating it and equipping it with all sorts of appendages, including extra clothing and extra shoes. The humongous bag was the real protagonist of the show: the centre of gravity around which wonderfully layered looks were built. Visually, it was a feast, but it also felt like a trick: an impactful way to deceive and pamper up a very Prada Sport collection, made essentially of activewear that was as market and marketing ready as it possibly gets. Nonetheless, with her stress on the traveling theme, Prada hit one of the season's nerves. 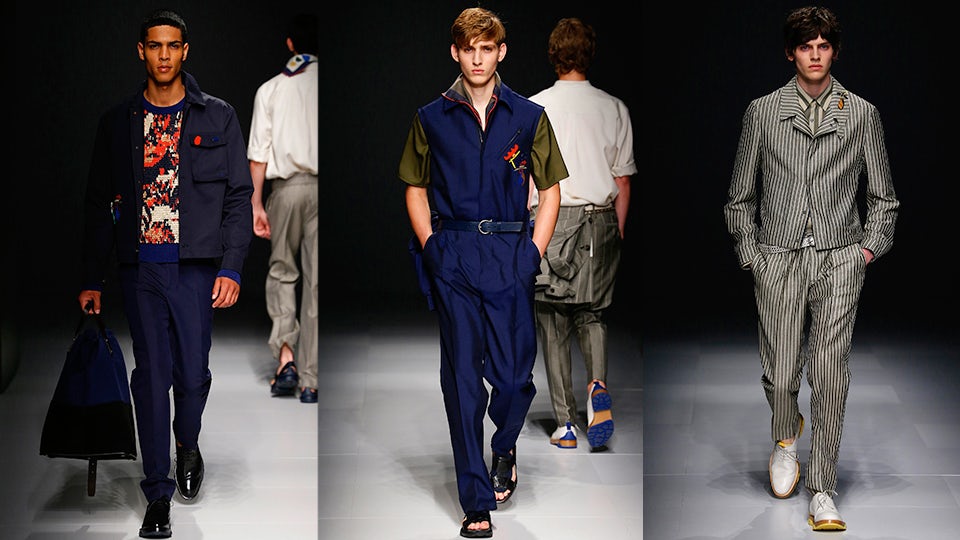 There were travellers, both literal and not, everywhere. From Ferragamo's urban safari to Fendi's ode to sun and fun which promoted a catchy idea of relaxed luxury for the plugged generation, but nowhere did it get so lavish and baroque as Gucci, where Alessandro Michele stitched together a poetic detour between naval gear, Japonisme, pop and decadence that felt totally his own, but that also had a sharper focus than usual. Which, to silence the detractors, means there is room for improvement in the house newfound style lexicon.

In the span of a few seasons, Michele managed to build a code, which is impactful and unmissable, and he moves easily and endlessly within it. In a country like Italy, where generational turnover is hard, he is also a testament to the fact that where there is a will there is a way. 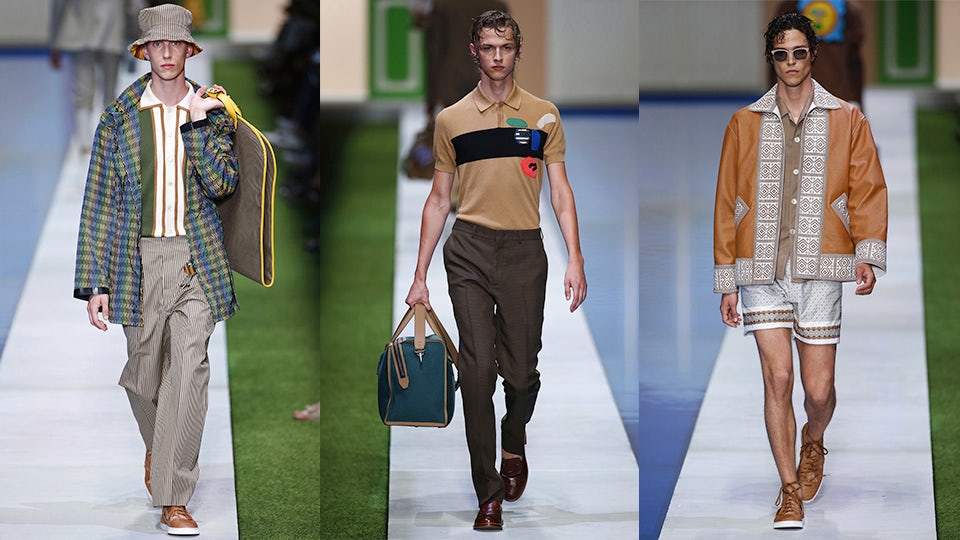 Speaking of which, in Italy, the big wigs continue stretching their muscles over the newcomers to the schedule, and the Camera della Moda really does not help. It was a bit of a pity, for instance, that a brand as progressive as Prada put a very important dinner on over two shows that are actually bringing new energy to the city: Damir Doma and County of Milan — both of which showed mixed gender collections.

Of course the audiences for such events are different, but acting in such a way is not a sign of encouragement and acknowledgement that things are moving forward. As for the roster of young guns supported by the Camera, the shows looked like mere filler for the voids in the calendar and the choice haphazard. A panel of neutral advisors from different fields would certainly help. 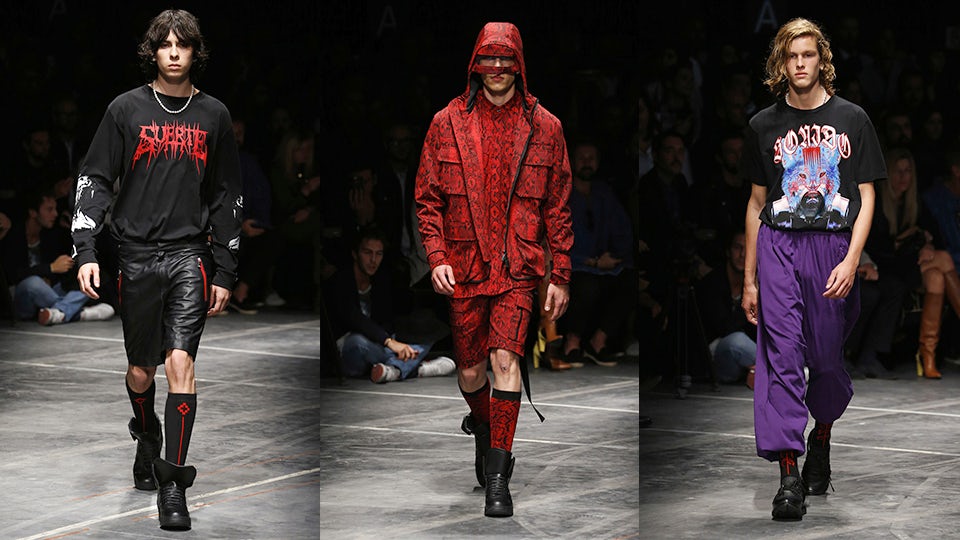 Yet, nothing is truly lost. This was an interim season and decisions will be made soon, hopefully taking into consideration the global fashion picture. Milano has a specific role in the system, in fact: it promotes the perfect balance of ideas and commerce. That's the challenging topic that designers, institutions and press should work around in order to find ways that are relevant for the moment.