Dancing on the Lip of the Volcano with Dries Van Noten

All things taboo prove irresistibly attractive in a dark and decadent collection from Dries Van Noten. 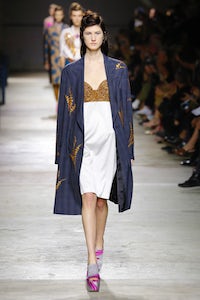 Dancing on the Lip of the Volcano with Dries Van Noten

All things taboo prove irresistibly attractive in a dark and decadent collection from Dries Van Noten.

PARIS, France — Time was, back in the 1980s, when Dries Van Noten and his friends used to get really dressed up to go out. His new collection suggested that time may be coming round again. From the tip of the very done hair to the toe of the very platform shoes, Van Noten offered his vision of a party girl who values eccentricity at least as much as glamour. He threw out a handful of descriptives: flamboyant, kinky, infatuated, fearless. Madonna was one of his presiding spirits (brought to mind by a bra), but so was art patron Peggy Guggenheim. “Eccentric can also be a sad old lady with 25 cats,” he acknowledged ruefully, but that day would be a long time coming for the bright young things who crowded his catwalk.

Van Noten was drawn to the notion of the taboo: things you normally can’t do. So there were colours that shouldn’t go together; counter-intuitive combinations like extravagant bullion embroidery on plain cotton; a tattoo-ed body stocking under an elegant suit straight out a 1940s movie. Sophisticated but raw — that was the effect Van Noten sought. For all the declared ebullience, his colour palette was distinctly his own, an intense, decadent mix. Taboo was famously an 1980s club hosted by arch provocateur Leigh Bowery — Van Noten had Bowery’s artist cohort Trojan in mind with some of the rich, shiny ambiguity.

That’s actually always been one of the designer’s signatures. So has the feel of clothes from another time (future as much as past). You could see how the retro glam would be a slam for Van Noten’s critics.  The 1940’s were all over this show. But they were filtered through the 1980s when club kids would tart up in vintage gear, and too much was never enough.Van Noten captured that spirit perfectly, right down to the green-glittered eyelids. The 1940s, like the 1980s and like now, were times on the brink. Here we go again, dancing on the lip of the volcano.

In the centre of the industrial showspace, the Balanescu Quartet played Kraftwerk, keening strings taking the place of synthesisers with an elegant dissonance that perfectly suited the clothes. 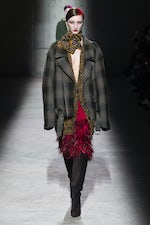 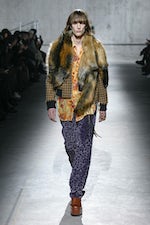 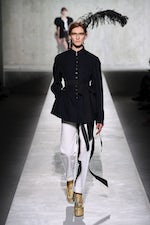 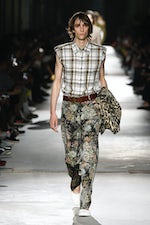