Decrypting the Manifesto of Aitor Throup

In his 10 years in fashion, Aitor Throup has inspired, intrigued and irritated with a body of work full of foreplay. On Sunday night, he promised consummation. 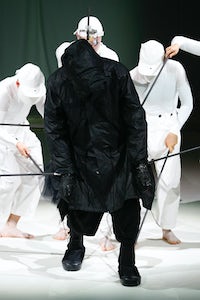 Decrypting the Manifesto of Aitor Throup

In his 10 years in fashion, Aitor Throup has inspired, intrigued and irritated with a body of work full of foreplay. On Sunday night, he promised consummation.

LONDON, United Kingdom — Now that London Collections: Men is ranked and filed for another season, there’s time to reflect on the most polarising moment of the four-day event. On Sunday night, the sportswear visionary Aitor Throup offered six looks — “trans-seasonal prototypes,” he called them — in a presentation called “The Rite of Spring/Summer/Autumn/Winter” that was much less fashion show than performance art piece. Stravinsky played as we filed into 1 Marylebone, a grand church in another life. “Please be advised there will be two explosions 20 minutes into the show,” counselled a pre-show email. Even forewarned, I jumped.

The garments were styled on life-size puppets manipulated by four technicians. Each outfit’s glacially-paced passage up and down the runway was clearly physically taxing for them. Six looks? Twenty minutes-plus? Most shows dispense with their 35 or so outfits in not much more than 10 minutes these days. After the performance, the tiny backstage area had the overpowering reek of a hard day’s honest labour. Performance? Best make that an arduous ritual — for the audience as well as the actors.

It’s fair to say the response was mixed. There was a walk-out or two, rolled eyes, raised brows. There was also unrestrained enthusiasm at the end, and an admiring throng clustered by the six puppets swaying in a row. Hung from their necks, they looked uncomfortably like executed partisans, but “uncomfortable” is a sensation Throup is quite…er… comfortable with. In his 10 years in fashion, he has inspired, intrigued and irritated with a body of work that has been perpetual promise, foreplay galore that has never quite got to the happy ending. Coitus Interruptus. On Sunday night, Throup promised consummation after what he described as years of unhappiness, self-imposed limitations, blindness and self-deception. 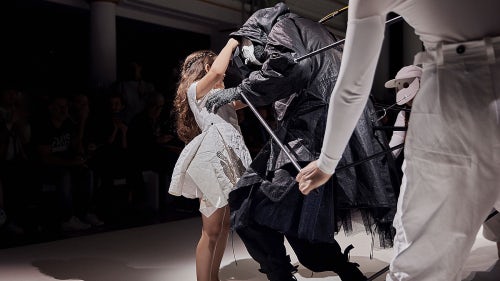 “This is a self portrait,” declared the show’s manifesto. Throup has always been good at those, providing reams of written and visual material to back up earlier clothing concepts (his words, “collection” being a bit too ordinary) that came with weighty titles like “When Football Hooligans Become Hindu Gods” or “On the Effects of Ethnic Stereotyping.” Remnants of those old glories, produced during what has now been recast by Throup as his lost decade, were piled in the lobby on mannequins cast from his own body. They were painted white, the ghosts of his past like mourners at his wedding with the future.

“All those concepts were not really me,” he admitted at his rehearsal studio two days before Sunday’s performance. Quite the admission to someone — me — who, for 10 years, has listened to Throup expounding very convincingly and at great length on the whys, whats and hows of his creative process. He always sounded like a man who had no doubt at all that he was about to revolutionise menswear with ideas so intricate and innovative that they would even change the way we buttoned our jackets. Now it turns out all he had was doubts. “I was deeply insecure, shrouded by fear of being judged. And hermetically sealing my work meant it couldn’t be judged, which gave me security.”

Throup also sidestepped judgement by never actually bringing anything to market under his own name, always proposing a handful of fabulous prototypes that were dangled like dazzling precursors to a commercial something or other that was perpetually in the pipeline. On Sunday, there were intimations that nothing would change. The six “trans-seasonal prototypes” were delivered to Dover Street Market on Monday, where they would be sold as complete looks — like a piece of art or haute couture. Throup promised that, in January 2017, he would launch a commercial collection that extemporised on the ideas he presented. I wanted to say I’d heard it all before. But then he added that his priority was to put the past to rest, and those words came as a salutary reminder that Aitor Throup is someone other than a boy with a fashion dream. 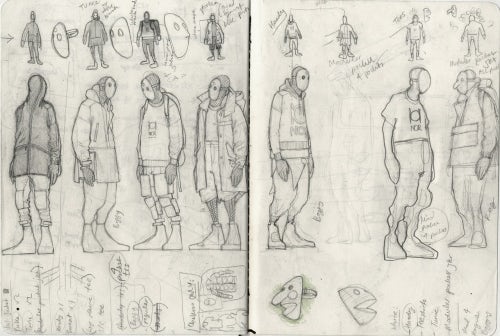 Would the walkouts, the eyerollers have felt different if they knew they’d been invited to an exorcism rather than a fashion show? Or if they’d at least been given the opportunity to choose whether they wanted to be party to a psychodrama played out in public? “On the 13th of February 2015 at 22:30 I had a creative epiphany.” That’s how Throup conveyed to us the seachange that took him from then to now. Or, as he more baldly declared: “I woke up.” He realised that his favourite artists — from Picasso to Kendrick Lamar — weren’t hiding behind elaborate narrative constructs or philosophical folderol. They were telling their own stories. And, as someone who’s already proved he can spin a yarn, Throup at last came to the realisation that it was his own story he wanted to tell.

It’s hard to imagine any other designer being quite so naked about their crises of confidence, especially when they have been so relentlessly, confidently vocal in the past about their creative process. (Wouldn’t you love to hear, say, Marc Jacobs open up in a similar fashion?) And if Throup was nervous about being judged before, his Eureka moment cast a Klieg light on the work he chose to show on Sunday. Ok, six looks, offering very little wriggle room. And, at a distance, looking surprisingly familiar: a parka, a hoodie, a quilted jacket, utility, sport, staples of the everyday, here in black, there in white. He’s made a very successful sideline for himself as a creative consultant to companies whose businesses are built on such things, most recently G-Star. But if you’d never heard of Throup — or were aware of his rep without actually knowing what it was based on — this first encounter with his clothes would probably have been underwhelming.

That’s always been a problem. Throup treats a parka like a piece of couture, which requires a degree of up-close-and-personal appreciation. I got that in my studio visit, when he presented one outfit that started as a multi-layered parka, then morphed, with some astute realignment of buttons and linings, into something that looked like a samurai suit with a Victorian bustle. As arcane as that sounds, it was sensational. Inevitably, Throup had found a different way to construct his parka, using bar tacks instead of conventional seams for a result that was so clean, so elegant, so new that, yet again, any rising sense of irritation that I was being talked through something that would never see the light of day was mollified. You can imagine your body moving with a different kind of self-consciousness in Throup’s clothes. At such times, it’s easy to see why someone like Rei Kawakubo is a fan. “Distilling is the key word,” said Throup. “It’s how [Stanley] Kubrick approached film.” 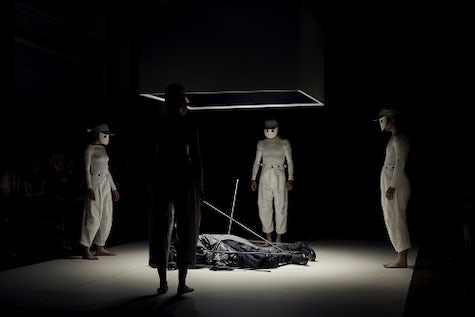 I could imagine that analogy galling Sunday’s naysayers, but Kubrick was also a notorious perfectionist who drilled on and on into the essence of the thing until he got what he wanted, while all those around him were tearing their hair out in frustration. It’s not the way the fashion industry operates. Throup insists he wants to challenge that by investing however much time and energy and resources are necessary into product development until the product is right. “The way car companies work,” he pointed out. “Investing in prototypes, then distilling for the masses.”

That’s the old confidence talking, putting a slightly grandiose spin on the clothes we wear every day. Especially when the masses have never been able to actually get their mitts on Throup’s concepts. I was looking for the signs of change he insisted had come. Then he mentioned Alexander McQueen and Hussein Chalayan and how affected he’d been by their shows. “I never figured out how to get that level of emotion,” he said. “Now I have.”

Throup is 35 years old. Maybe this is the starting line.

Editor's Note: This article was revised on 16 June 2016. An earlier version of this article misstated that Aitor Throup was a creative director at G-Star. He is not. Throup is as a creative consultant to G-Star.