There simply isn’t another soul in fashion with Van Beirendonck’s ability to blend the joyous and the ominous. 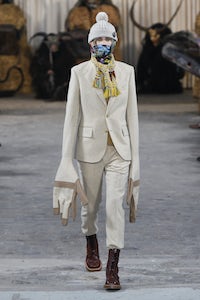 There simply isn’t another soul in fashion with Van Beirendonck’s ability to blend the joyous and the ominous.

PARIS, France — It’s hard to watch Donald Trump flapping his hands around without noticing how small they actually are. And yet they are the hands whose fingers control the Doomsday button. In that light, it was equally difficult to resist the temptation to view the hands in Walter Van Beirendonck’s collection — the huge mitts that hung down as extensions of jacket sleeves, the gloves with their extended fingers – as anything other than the rebuttal of tiny killer hands. Giant hands were healing hands, “big enough to heal the world”, said WVB. The inspiration was a shamanic image from the Yupik Eskimo tribe.

A similarly shamanic subtext underscored the live soundtrack, by an Austrian combo called Seidä Pass. To say they were extraordinary does scant justice to their scary, demonic intensity. But they were demon-chasers, not demon-raisers. For two days a year, Seidä Pass perform in the Tirol as perchten, shamans who chase away the bad times.

There simply isn’t another soul in fashion with Van Beirendonck’s ability to blend the joyous and the ominous. Not even Rei Kawakubo who is, unsurprisingly, a big fan. The new collection was called Zwart, “black” in Belgian, “because the time is black,” said Van Beirendonck. But the collection itself was anything but. The palette was awash with cheerful, bright colour, enlivened with folkloric embroideries. In one of them, WVB’s little avatar was balanced in the outstretched palm of a slavering bear facing down an equally fiercesome wolf. Ominous? Not really, Van Beirendonck insisted. “I’m a perfume bottle.”

That incongruously feminine notion was reflected in the silk scarves that masked the models’ faces – urban guerillas aestheticised – or the camo that was actually a very Arts and Crafts-y oakleaf pattern. Van Beirendonck is expert at stirring unease then mollifying it. But he’s fashion’s very own Grimm brother. At the heart of every fairy tale, there's always a serious threat.