It seems like all the designer cares about nowadays is dressing Instagram celebs who are easy to impress with glitzy looks. 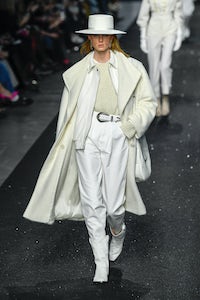 It seems like all the designer cares about nowadays is dressing Instagram celebs who are easy to impress with glitzy looks.

MILAN, Italy — "I pushed my idea of fashion into unexpected territories" said Alberta Ferretti in her show notes, describing another collection that leaned heavily towards the disco-hedonistic 80s - big shoulders, metallic foil, banana-shaped trousers and asymmetric ruffles - a fashion era that has already been mined by Isabel Marant, Saint Laurent under the tenure of Anthony Vaccarello and, well, Alberta Ferretti-owner Aeffe's very own Philosophy by Lorenzo Serafini.

As models kept striding down the runway, one was left wondering whatever happened to the distinctive woman Ferretti managed to conjure in the past- at once delicate and sturdy, poetic and pragmatic - which was integral to her success and totally her own. There are no traces left of this persona: it seems like all Alberta Ferretti cares about nowadays is dressing Instagram celebs who are easy to impress with glitzy looks. Sure, sales will likely benefit from such a move, but style-wise it's a major faux pas. And Ferretti already has a line targeting, more or less, this younger audience. Meanwhile, there is certainly demand in the market for the soft, assertive and slightly more grown-up take on femininity that Alberta is so good at. It's time to get back on track, and forget about influencers.