Social media stardom is a modern-day fairy-tale. In recognition of this uniquely 21st century alchemy, Dolce & Gabbana peopled their catwalk with tween idols and teen scions of privilege. 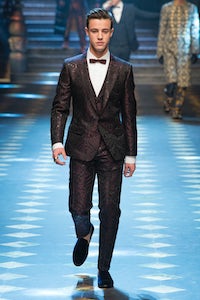 Social media stardom is a modern-day fairy-tale. In recognition of this uniquely 21st century alchemy, Dolce & Gabbana peopled their catwalk with tween idols and teen scions of privilege.

MILAN, Italy — Social media stardom is a modern-day fairy-tale. With a million clicks, likes and hits, commoners are transformed into kings and queens, princes and princesses. In recognition of this uniquely 21st century alchemy, Dolce & Gabbana called their new collection The New Princes, and peopled their catwalk with a digital elite of tween idols and teen scions of privilege. Even the ones who weren't celebrity-surnamed could boast formidable social media profiles. As proof, there was a small army of followers gathered outside the venue.

If courting a new generation is a priority for fashion businesses fishing for a foothold on the future, there was obviously a commercial canniness to Dolce & Gabbana's concept. "It's the tip of an iceberg," Stefano exulted after the show while his model millennials fluttered around. But there was a more personal element to the presentation too. Gabbana insisted that the young'uns took him back to the exuberance and energy of his early days in fashion, when Dolce and he were Milan's young princes, and their success story was the fairytale du jour.

The baronial backdrop, with its sweeping staircase and towering candelabra, was purest Disney. And the clothes took up that theme with a cartoon-ish vim that dabbled gleefully in kitsch. Was that the Lion King we saw before us? There was certainly a pride's worth of big cats printed, woven or lavishly embroidered all over the collection. Some of those embroidered cats were dressed up like a Ruritanian generalissimo. Not remotely camp!

Of course it was, because in amidst the exaltation of youth, beauty and good connections, there was the inevitable shot of irony that accrues to fashion fairytales: young princes performing for old queens. There were all the familiar Dolce tropes — hyper-tailored three-piece suits, silk pyjamas, sportswear gilded or distressed— but they looked like scaled-down, dress-up clothes for the boys on the catwalk. And when the designers stuck gold crowns on their heads, those boys became more little princes than young princes.

The Little Prince was never really able to make sense of the adult world. Dolce & Gabbana obligingly provided this baby Adam with an Eve, or at least, many Eves, some of them related to Sly Stallone and Lionel Ritchie. The baby blondes in the show were wearing Dolce’s classic Siciliana: molto racy widow’s weeds, womenswear that’s about as salted with experience as any female garb anywhere. And that may have been Domenico and Stefano’s last wink: this “new” generation is a lot older in its outlook than any that has come before. And "happy endings" aren't what they used to be.