A violent motif of stalactites perfectly captured the schism between what was and what will be at Versace. 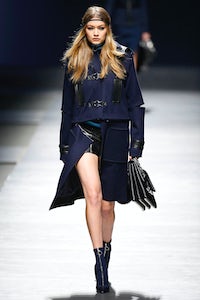 A violent motif of stalactites perfectly captured the schism between what was and what will be at Versace.

MILAN, Italy — The words of the songs that have soundtracked Donatella Versace’s last few shows have significantly amplified the general message of female empowerment that she has been trying to broadcast with her clothes. But things got more specific today. A loose translation of the Italian lyrics for today’s stomping killer of a track by Erasmus went something like this: “It’s quite impossible for you to pretend you don’t know who I am. DO YOU REMEMBER ME?" The empowerment this time was Donatella’s own. Season by season, her voice is getting stronger. “Look at me, I’m here, this is me now.”

The house codes are still there, but she has overwritten them. The classic baroque silk was now collaged with banker’s stripes in a knit-backed shirt that invisibly zipped up the front. That invisible zip was the collection’s secret weapon. It unzipped to bare a shoulder, a leg, a back, or to deconstruct Gigi Hadid’s duffel coat, allowing for different kinds of movement.

Knits were important for the same reason. Movement, athleticism: these are key things for Donatella now. A woman stays in shape so she can fully exercise her power. That was the point of her overly body-conscious couture. Here, the body-con was more rational, working better for the everyday: knit sheath dresses, and sharply tailored jackets paired with stirrup pants for a pared-back silhouette.

The most intriguing thing about the collection was its coldness. The palette was dominated by chilly pastels, pale blue and pink. The dominant visual idea was a stalactite, printed as a shard of ice that bifurcated dresses, outlined in sequins on a black mohair sweater, or inserted as jagged panels trimmed with zips on coats and jackets.

It was a violent motif, but it perfectly captured the notion of schism between what was and what will be, at Versace and in Donatella’s tough new world. You could say she’s learned the hard way. But at least — and at last — she’s learned. 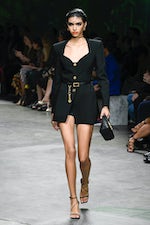 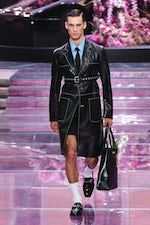 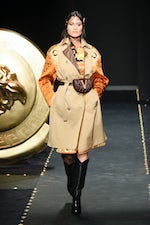 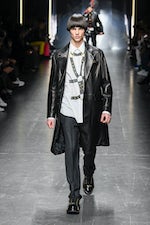