While the inspiration was raw, Clare Waight Keller's collection offered a more refined vision captivated by an element of theatre — clothes for alt-Hollywood. 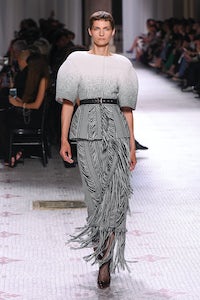 While the inspiration was raw, Clare Waight Keller's collection offered a more refined vision captivated by an element of theatre — clothes for alt-Hollywood.

PARIS, France — On Clare Waight Keller’s mood board, there was a photo of Jordan, the punk icon who launched a million eldritch fantasies as the face and body of Vivienne Westwood’s retail outlets Sex and Seditionaries. Jordan would combine the most confrontational hair and makeup situations with bondage suits, cashmere twinsets and pearls. She was deliciously unsettling.

Waight Keller aimed for something similar with her latest couture collection for Givenchy. She imagined a tribe of Jordans invading a lost chateau, brimming with 17th and 18th century grandeur, and tearing the decorations apart to create a new hybrid gorgeousness. The curtains, the wallpaper, the carpets, the bedding, the exotic fabrics harvested from Persia and India, all of it repurposed in the spirit of something Waight Keller called “Noblesse Radicale.” Couture anarchy!

She didn’t actually go there. The closest she got to Jordan was a sheer pink ribbed top paired with a black taffeta skirt. If the inspiration was raw, her collection offered a much more refined vision. The hair and makeup were positively monastic. The clothes initially had the monochromatic positive/negative quality of black and white photographs, “like old Lartigue images from the 1920s,” said Waight Keller. The belted rigour of the early looks was maybe more 1940s. But then the hair started to sweep into sculpted punk shapes, and there were feathers everywhere. “I imagined bird-like creatures inhabiting the rooves of these old chateaux,” the designer mused.

So she clearly had drama on her mind. That was obvious in the cinematically overscaled silhouettes: the black velvet sheath flaring into a huge ruff, the vast corona of tulle topping gold brocade pants, Kaia Gerber’s hillock of scintillating green feathers. They were clothes for alt-Hollywood. Waight Keller liked that. She was captivated by the element of theatre. Her show was a performance. Which was why the most enchanting element in her collection was the notion of the home invasion at that old chateau turning into a dressed-up house party. All those decorations torn down and turned into COUTURE. Pose!