Dean and Dan Caten layered heaps of decoration and dark glamour on an unlikely hybrid of Victoriana, military and samurai. 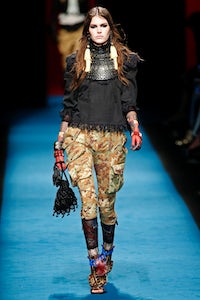 Dean and Dan Caten layered heaps of decoration and dark glamour on an unlikely hybrid of Victoriana, military and samurai.

MILAN, Italy — In March 2007, Nicolas Ghesquière delivered a seminal Balenciaga collection that changed the course of fashion with an intensely wrought mash-up of military and ethnic styles. The distinctive silhouette — shrunken, peak-shouldered admiral jackets matched with low-rise fatigues shaped like riding trousers and higher than high stilettos — and his dry yet inventive take on decoration — has been haunting the fashion system ever since.

Dean and Dan Caten's latest collection for Dsquared2 was heavily indebted to Ghesquière's effort — in a good way.

In today's era of generalised appropriation, the meaning of originality has radically changed. Designers can now legitimately take inspiration from esoteric ideas, objects and styles both past and relatively recent. Indeed, these days, it is the value of the interpretation — or reinterpretation — that counts.

Over Ghesquière's base, the Caten twins went gaga with decoration and dark glamour, pushing opulence to unprecedented heights. At least, unprecedented for what once was a streetwise label. The unfolding of the collection on the runway made for an intoxicating climax: each look was more or less similar to the previous, yet the bulk of fringes, tassels, embroideries and military crests kept multiplying. The unlikely hybrid of Victoriana, military and samurai — a hard one, on paper — actually worked. It was all about the unabashed pleasure of embellishment. Dsquared2's women are as fierce and gloomy as they are rich, this season. Period.

At times, however, the looks got quite heavy. The show was overly — if studiously — styled and the beauty of pieces per se was somehow lost in the pile-up, but then again the overall image it communicated was assertive and there is plenty of time to break things down for the shop floor. 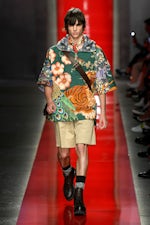 DSquared2's He Said, She Said 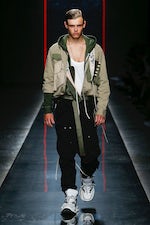 A Military Fantasy at DSquared2 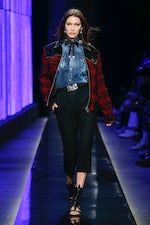 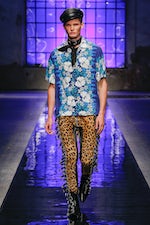