Lucas Ossendrijver said the Lanvin collection was his reaction to what’s going on in the world. A wardrobe for a world gone horribly wrong. 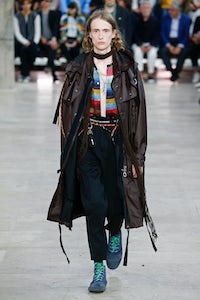 Lucas Ossendrijver said the Lanvin collection was his reaction to what’s going on in the world. A wardrobe for a world gone horribly wrong.

PARIS, France — Urgency, fear, a world in freefall… the motivators for Lucas Ossendrijver’s new Lanvin collection weren’t exactly a barrel of monkeys, but they acknowledged a new reality. “Where is my place in that?” Ossendrijver wondered. “Is it enough to make nice clothes?”

Clearly not, because it wasn’t “nice” clothes he showed today. Raw-hemmed tailoring, ratty, hand-dyed and hand-torn scarves, the deliberate imperfection of baggy-jacket-too-short-pants proportions… a wardrobe for a world gone horribly wrong. “I wanted the boys to look a bit careless and free,” said Ossendrijver. “Not really like dressing for a festival, just natural.” But hyper-mobile with it.

There were reflective stripes on the clothes, and a jacket sleeve with a built-in wrinkle, like it had been frozen in movement. Embroidered arrows pointed forward, though towards what wasn’t quite clear. The oil refinery that was embroidered on a blouson? The grim city landscapes that were another visual motif? Dystopia was just around the corner.

The notion of travel, so prevalent this season, was reflected in the floaty nylon coats, the zip-on sleeves (zipping off), the undone laces flying away. Nomads on the run. The shoes caught that mood. Shabby but sporty. Ossendrijver said the collection was his reaction to what’s going on in the world. Clearly, it’s going to be hugely interesting to see how his vision gels with that of incoming womenswear designer Bouchra Jarrar whose point of view has a subtle grandeur. 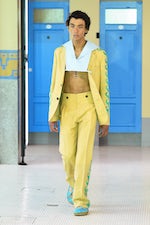 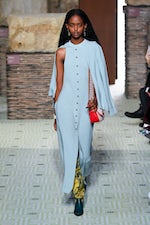 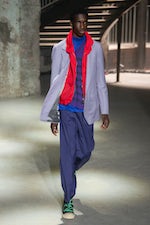 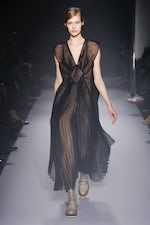