Kym Ellery is bravely reconsidering the industry's breakneck pace, but the collection she showed today struggled under the spotlight of couture. 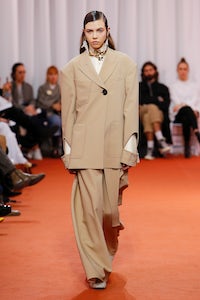 Kym Ellery is bravely reconsidering the industry's breakneck pace, but the collection she showed today struggled under the spotlight of couture.

PARIS, France— Kym Ellery has moved to Paris and she wants the world to know it, just as she’s proud her new atelier was once inhabited by Gabrielle ‘Coco’ Chanel. They say Proust himself hid out there, too. That’s a big Parisian story to tell backstage at your first show during couture week, but Ellery’s never been afraid to run with the big dogs. Her ambition has seen the brand expand from its humble Aussie roots to being stocked in over one hundred doors worldwide.

The collection shown today straddled worlds, in its dual purpose of introducing a smattering of bespoke, made-to-order items into her ready-to-wear offering whilst speeding up and staggering deliveries throughout the year. It’s a brave move and, truly, hats off to all designers who are re-considering the breakneck pace of the fashion cycle. Yet today it was a hard task to consider this collection through the lens of haute couture. Perhaps Ellery isn’t asking us to, but the context allows for little margin of error, and today’s show threw the designer’s work under a powerful spotlight of scrutiny when it came to the mastery of flou expected from the work of petits mains. Fit, drape and seams were an issue on multiple occasions, however a strong 40s tailoring silhouette gave the show a solid outerwear message, their cut-out cuffs and pretty decorations (crystal beaded oyster appliqués, bugle beads, and fancy buttons) gelling with the season’s theme: an artsy woman obsessively curating her perfect life from head to toe and from dawn ‘til dusk.

After the show, Ellery spoke of the exaggerated volumes that have become a brand signature, and that today became her way of approaching the bespoke eveningwear pieces that we’ll see moving forward. A sweeping claret silk coat was quilted with repeating outlined faces, and a too-long-sleeved ball gown fanned to a fishtail of black cloqué, both demonstrating the designer’s first foray into couture fabrications. Their simplicity as a single statement worked, whereas elsewhere elements of asymmetry, cut-outs and fussy details overcomplicated looks. Perhaps next season Coco’s ghost may whisper through Ellery’s hallowed halls: “Before you leave the house, look in the mirror and take one thing off.”