There were no major tweaks to Ellery’s look and feel, but the collection's craftier touches held promise, softening the brand’s street-style appeal. 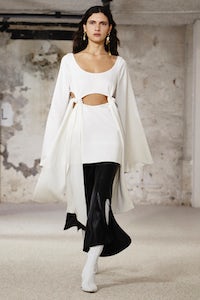 There were no major tweaks to Ellery’s look and feel, but the collection's craftier touches held promise, softening the brand’s street-style appeal.

PARIS, France — The idea of a ‘digital fashion show’ is nothing new, but as Kym Ellery explained at her static presentation-cum-cocktail in her showroom’s gilded Paris HQ, it is a democratiser. “No front row, no editors hierarchy — we released the film online at the same time as the event,” said Ellery, who’s boyfriend Max Sokolinski jammed in an adjoining room.

The Australian designer has carved a global retail business out of her balloon-sleeve tops and giant flares, her clientele catching onto the mix of high-shine and homier fabrics that she herself wears. It’s fare for a sophisticated good-time girl, and this season Ellery thought of hers as a flapper retro-futurist — think 1920s via 1960s — a sort of historical musing on what we should (maybe) be wearing today. It’s a complex conceit, but when you saw the scooped necklines or ultra-point collars, monastic Star Trek tailoring, you got the gist.

There were no major tweaks to Ellery’s look nor feel here today — an egg yolk yellow popped against neutrals and monochromes, sporty ripstop nylon scrunched next to spongy wool — but the details were worth a closer look. One print swam with Venusian mermaids, and a delicate golden jewellery line clasped cowrie shells to wrist and ear. Those craftier touches held promise, softening this statement brand’s street-style appeal.