The collection looked so pure and so elevated — a bit more Giorgio than Emporio. 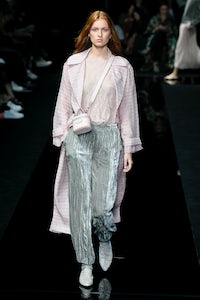 The collection looked so pure and so elevated — a bit more Giorgio than Emporio.

MILAN, Italy — For Giorgio Armani, a palette that famously centres on greige is about more than colour. It's a whole way of being — one that blends in with the urban environment, making clothes disappear and the wearer’s personality pop.

It was apparent today in a very good, if long, Emporio Armani show. One that focused on lightness — structural, as well as chromatic — and felt elegant, a word that has been almost forgotten, but is more relevant now than ever before. It all looked so pure and so elevated — the mannish pantsuits, the duster coats, the floaty dresses — but felt a tad more Giorgio than Emporio. And yet... the nonchalance and the freedom of spirit were very much Emporio, plus the footwear was sneakers and flats.

The DNA of this line, after all, is more about attitude than a specific look, and Mr Armani is at his best when he does Armani instead of chasing l'air du temps. Miniskirts and overt femininity somehow feel odd here, so it was relieving to get pastels and a gentle, if assertive, femininity. The hats were a bit de trop, but the rest worked perfectly.