The detail was extraordinary, the colour scheme vibrant, but the clothes could have used the edge embedded in ‘inspiratrice’ Tina Modotti — silent movie star and Communist agitator — to make the story whole — and relevant. 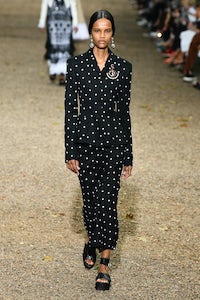 The detail was extraordinary, the colour scheme vibrant, but the clothes could have used the edge embedded in ‘inspiratrice’ Tina Modotti — silent movie star and Communist agitator — to make the story whole — and relevant.

LONDON, United Kingdom — Tina Modotti might have been created for Erdem in the laboratory where muses are made, so perfectly did she tick the boxes on his checklist of inspiratrices: glamorous, creative, restless, troubled, doomed. Born in Italy, Modotti was a silent movie star in Hollywood, a photographer and Communist agitator in Mexico, an exile in Russia and eventually, on her return to Mexico, the possible victim of a political assassination in 1942. “Different women, different geographies,” Erdem mused as he contemplated a particularly complicated mood board.

The show itself reflected that complication. It opened with a woman in a severe tailored, elongated navy suit and ended in tiered cap-sleeved florals with red opera gloves. In between, there were variations on the Victorian dress that fascinated Modotti, from a funereal black gown to piano-shawled wraps to confections of broderie anglaise that would gladden the heart of a man of god. But there was also a spunky little studded perfecto layered over sheer lace, and a glam-rock pink and vermilion pantsuit (that particular colour combination is the spice on London’s catwalks this season). Many of the looks were topped with wide-brimmed hats, the kind the Don and Doña would wear when they were riding out to survey their ancestral acreage.

The detail was extraordinary, the colour scheme vibrant. It cried out for blue Mexican skies and the intensely coloured backdrop of Casa Luis Barragan in Mexico City, where Erdem did much of his research. Instead, we had a lowering grey English ceiling and the forest green of the trees that lined the allée in Gray’s Inn Court down which the models paraded. True, there’s no accounting for nature, but here it muted the impact of Erdem’s collection. And another thing: on his moodboard, in amongst the moody romanticism of her lover Edward Weston’s iconic portraits of her, there was a photo of Modotti the Communist agitator, looking tough in overalls. Oh how I craved that edge in Erdem’s clothes to make the story whole, to make it relevant. After all, here was a fierce woman of principle who was quite possibly murdered for her beliefs.