Sometimes designers go to India and come back with cliché. Cortazar came back with a  winning concoction of traditional styles and sportswear — and belief in the power of creation. 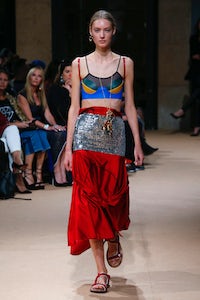 Sometimes designers go to India and come back with cliché. Cortazar came back with a  winning concoction of traditional styles and sportswear — and belief in the power of creation.

PARIS, France — In June, Esteban Cortazar's apartment burned down. And — post-Beyoncé — we all know what do when life gives you lemons. The designer didn't phrase it quite like that backstage after his life-affirming show, but he did say that he had become determined to turn the dark into something light. The result was a spiritual, joyous and personal spring collection that prompted loud appreciation from the appreciation.

Was the excitement warranted? Cortazar's garments have an easy contemporary feel, and gain a lot of traction from the effect that you get by pitting rigid leather pieces against billowing, loose ones.

This season, a journey to India that the designer made with his mother earlier in the year was channelled into sari-referencing colours and cuts, along with knots, lifted from the way many Indian women style their traditional clothes. Sportswear references were then added to the mix, partly inspired by the way schoolchildren in Indian villages effortlessly blend traditional garments with western fashions. Personal memories of surfers, skaters, Rasta culture and Erykah Badu were other ingredients the designer mentioned as part of the concoction, which went from glittery sequins to bias-cut washed denim and patchwork leather tops echoing Tibetan scripture.

Such disparate references sometimes create a lack of cohesion, but here the clothes seemed imbued with the essential humanness of making them — the way that material, colour, technique and aesthetics make body and mind inseparable.Sometimes designers go to India and come back with cliché. Cortazar came back with something that felt like belief. In what? In the healing powers of creation, in the way that beauty can be a force for good. Put simply: in humanity.

A white simple dress came down the runway in the midst of all the sequins, flared trousers and embroidery. It looked out of place at first, but then the model went past you and you saw that the cut-out in the back of the dress had a message: a red-green-yellow, hand-threaded peace sign.

Many designers have responded to our troubled world with a need for optimism this season. Often it has felt too escapist, here it read like hope.