The collection felt cohesive and consistent, true to Etro's bourgeois bohème identity without coming across as obtuse. 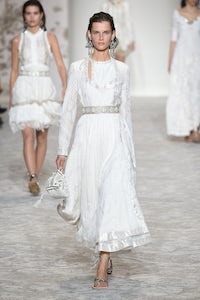 The collection felt cohesive and consistent, true to Etro's bourgeois bohème identity without coming across as obtuse.

MILAN, Italy — Even rebels grow up. It's all fine, as long as they don't sell out. Etro was founded in 1968, at the peak of the counterculture movement which loomed large even in Italy. This means the brand will turn 50 by the time the collection shown today will hit the shops. "We thought it was the right moment to explore our core values: color and paisley in particular," said Veronica Etro. For the first time she worked with her brother Kean, who's responsible for the company's menswear, on a co-ed show.

The stress on heritage and the new format worked well: the collection felt cohesive and consistent, true to Etro's bourgeois bohème identity without coming across as obtuse. The Etros translated paisley — maybe a bit predictably — into an Indian theme, but then added some twist and some charming Romeo Gigli references. The show was in fact a journey: from the serene lightness of white to the energetic frenzy of psychedelic colour, and from simplicity to overt decoration — another Etro signature. The overall effect was charming and decidedly decadent, in a nice way. The best looks, however, were the purer ones, and, for women, the slightly masculine ones. Lightness: another aspect of the Etro DNA worth exploring. After all, 1968 was all about getting rid of old schemes.