Evoking an Old Future at Courrèges

A refreshing revival, where the acolytes were perfectly happy to paint within the lines drawn by the old master. 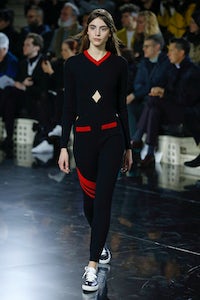 Evoking an Old Future at Courrèges

A refreshing revival, where the acolytes were perfectly happy to paint within the lines drawn by the old master.

PARIS, France — At this point in the new-wine-in-old-bottles game, it’s kind of refreshing to come to a revival where the acolytes are perfectly happy to paint within the lines drawn by the old master. After Tuesday’s sharp, pacy show — their second — Sébastien Meyer said he and partner Arnaud Vaillant had felt challenged by the death of André Courrèges in January to extend his modernist aesthetic in a way that honoured him. What Would André Do? The duo’s answer: make it new, make it warm, make it practical.

Making it new? Courrèges was fascinated by new ways of doing business, so he would surely have appreciated the fact that Meyer and Vaillant would be offering thirty styles straight off the runway the day after the show. He was also partial to new technology, so he would have enjoyed the coats that “made it warm” with the press of a small button on one sleeve (the power source will be your phone).

As for making it practical, Meyer and Vaillant offered a collection that was a consummate update of Courrèges’ own shtick. Except that his signature registers now with such an enviable timelessness that an update wasn’t even really necessary. All the boys had to do was follow the original model for modular clothing.

Courrèges imagined fashion that was speeding into the future. Meyer and Vaillant ran with it: hyper-athletic lean ribbed knits; open seams articulated to emphasise movement; trompe l’oeil detailing like the shirtsleeves attached to one boy’s waist which were pre-tied, savingprecious seconds in your time-starved day (quite what the double-waistbanded pants were saying wasn’t quite so clear). And, of course, the little vinyl jackets, skirts and shifts, still as space-station-ready as ever.

Maybe timelessness is not the right word after all. Courrèges extemporised from his early-1960s environment to create a vision of how he imagined clothes would look in a future that must have seemed like it was rapidly approaching.

Look at those clothes now and it’s hard not to feel nostalgic for the optimism and energy of that future. It is, on the other hand, not so hard to feel grateful to Meyer and Vaillant for so expertly evoking it. 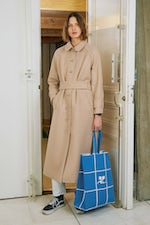