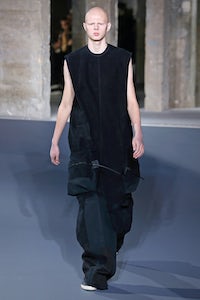 PARIS, France — Rick Owens has never been afraid to tackle the Big Subjects. He mentioned "ecological anxiety," while he was brooding on his new menswear collection, and, despite his claim that he was scarcely qualified to talk about it, there was an incipient eco-consciousness in jackets cut from pirarucu, fishskin from the Amazon, or clothing labels dipped in honey from the beehives his wife has installed on the roof of their house in Paris.

When he called the collection Mastodon, Owens was making a clear connection with species extinction. His new store in LA is not so far from the La Brea Tar Pits where prehistoric remains were famously found. There were outfits here that suggested primeval upheaval, lava flows, volcanic rock formations, and Neanderthal wraps. They embodied in cloth the always-atavistic undertone of an Owens collection.

But extinction for some spells evolution for others. In one of those leaps of thought, macro to micro, he makes so easily, Owens was also thinking about the evolution of fashion. “Clothes are fundamentally about sex,” he mused before his show today. He was absorbed by the ways that people have dressed to attract attention at various points in history, and, being Rick, he was particularly intrigued by the use of volume to attract attention to areas you’re concealing at the same time. The bustles and panniers, in particular, that emphasised a woman’s hips and backside in times more repressed than these. As soon as he said that, you could see the same bunching and swelling in his new menswear, in the massive, molten swathes of fabric that undulated round hips, in the huge pannier-like cargo pockets. The scale matched the trouser legs that hit the ground like tree trunks — or a mastodon’s appendages. As far as sex goes, though, the power of attraction here was less about the attraction than the power. More immediately appealing — seductive, even — were the suits, cropped, fitted jackets over voluminous trousers, and coats, particularly one with gathers of cloth across its back (an Owens bustle by any other name).

“Haunting and creepy and elegant and beautiful.” That, in Owens’s own words, is the best thing you could ever say about one of his shows. Some of his models had faces whitened, eyes blackened, like an ageing vedette in the old Hollywood he is so attached to. “I’ve always loved kabuki, but I wanted this to be glamorous.” The effect pleased Owens. “It’s Franju’s Eyes Without a Face,” he enthused. And it will be truly haunting and creepy and elegant and beautiful if he carries it through to his women's show in six weeks. 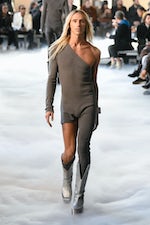 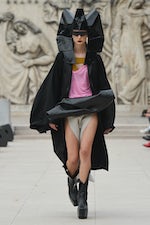 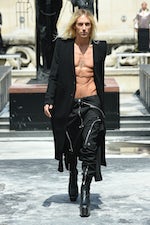 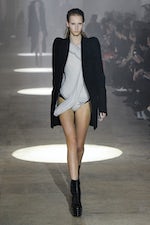