For their sophomore outing at DKNY, Maxwell Osborne and Dao-Yi Chow balanced an elevated hip-hop sensibility with deconstructed drama. 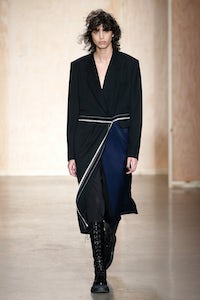 For their sophomore outing at DKNY, Maxwell Osborne and Dao-Yi Chow balanced an elevated hip-hop sensibility with deconstructed drama.

NEW YORK, United States — There was once something pretty iconic about the youthful, New York esprit that Donna Karan’s DKNY label stood for. It could have meant Downtown Kids New York, when she began it in 1989. When the Public School designers Maxwell Osborne and Dao-Yi Chow took over last season they set about trying to channel that bygone freedom, a feeling that gelled well with their own bad-girl brand of luxe streetwear that has been making its own waves on the local scene. But they missed the mark somewhat, and Autumn’s sophomore outing was a chance to reconcile some of the lost ground that came from over-thinking the brand’s 1990’s tailored minimalism.

To begin with, they changed stylists (Garage Magazine’s Charlotte Stockdale took the reins for round two), and it showed. Her sense of immediate, sports-inflected fun was evident in the collection’s more extreme athletic looks, from parachute track suits and a giant, satiny bomber to the graffiti-printed lattice pieces that gave this collection an elevated hip-hop sensibility. It balanced their tendency for deconstructed drama, which played out in cropped blazers, strappy aprons and belted dungarees — statement pieces that at times erred towards awkward compared to the ease with which they approached the opening topcoat slashed with selvedge and satin at the waist.

Later on, questionable fabric choices meant a sequence of panelled dresses and tops were lost in a sea of black velvet lace or a degradé felted check, and an attempt at ironic Photoshop graphics (‘Insert Logo Here’, for example) read twee for 2016. Thankfully the duo remedied those mishaps with a bold eveningwear finale, where boxing glove laces bifurcated pretty satin slip dresses and skirts in deep scarlet and tomato red silk. The tension between high fashion and the street felt intriguing here, more so than the logo sweatshirts they sent out over each finale look. Those spelled out slogans like ‘Dazed Kids New York’, ‘Don't Knock New York’, and ‘Designers Know Nothing Yet’. Whether the latter was a humble dig at their own baby steps or a wider observation on the industry? We thought best not to ask. 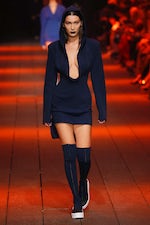 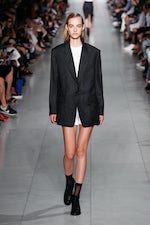 The Sexes Battle on Wall Street for DKNY