In her first couture collection at her new gig, Maria Grazia Chiuri drew a line from Valentino’s pale princesses to Dior’s winsome Titianas. Some of it worked, some not so. But if you were looking for green shoots, they were in the most reassuring places. 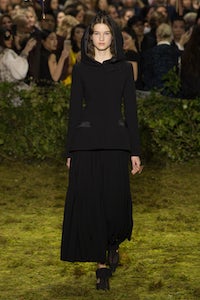 In her first couture collection at her new gig, Maria Grazia Chiuri drew a line from Valentino’s pale princesses to Dior’s winsome Titianas. Some of it worked, some not so. But if you were looking for green shoots, they were in the most reassuring places.

PARIS, France — Maria Grazia Chiuri has a huge mountain to climb. Not only is she learning the intricacies of one of the grandest French couture ateliers, she doesn’t even speak the language. She’s finding her way through a maze of new challenges. That’s why her first haute couture show for Dior on Monday afternoon revolved around a labyrinth, a huge, leafy, mossy maze with the Tree of Life, strung with fairy lights, at its heart. Beautiful.

Post-show, Chiuri was quite open about her steep learning curve, not simply the language barrier, but also the enormous archive that confronts her. She is well-versed in the work of her predecessors, the tradition of Mr Dior himself and Saint Laurent, the theatre of John Galliano, the modernism of Raf Simons. Speaking for herself, Chiuri said, “I want to live my dream.” To create something magical, aspirational, but still rooted in reality. You could sense all of that in the collection she showed. Some of it worked, some not so. “It’s a huge story,” she acknowledged. “Impossible to know everything in a few months.” And that, realistically, is really all she’s had so far.

But if you were looking for green shoots, they were in the most reassuring places. Chiuri opened with the Bar, the lingua franca of all those who would design for Dior. A black Bar, softly shaped and shown with voluminous culottes, some pleated, had a sensual rigour. Chiuri’s acknowledgment of Mr Dior’s superstitious nature yielded some beautiful astrological and tarot embroideries on taffeta dresses. The midnight silk gown handpainted with a streaking gold comet was an artfully cosmic marriage of Dior and Chiuri.

The signature she created with Pierpaolo Piccioli at Valentino was so particular that it’s inevitable people would look for traces of it in her new gig. With her debut collection for Dior, Spring 2017’s ready-to-wear, Chiuri made a concerted effort to defeat such expectations, but she did it with a head-scratching fencing theme. Mercifully, on Monday, she declared, “It’s impossible to use the same language in pret-a-porter and couture. Pret-a-porter is about time, couture is timeless.”

In her first couture collection, that timelessness drew a line from Valentino’s pale princesses to Dior’s winsome Titianas. How much of a problem that is will hopefully be resolved in the immediate future. Yes, Chiuri wants her dream rooted in reality — and she is quite pragmatic about learning a new culture, in terms of both a new company and a new country — but, with Stephen Jones’s masques de bal, Red Riding’s hoods, stars sparkling on the models’ faces, and Edward Scissorhands on the soundtrack, she is clearly still in love with fairytales.